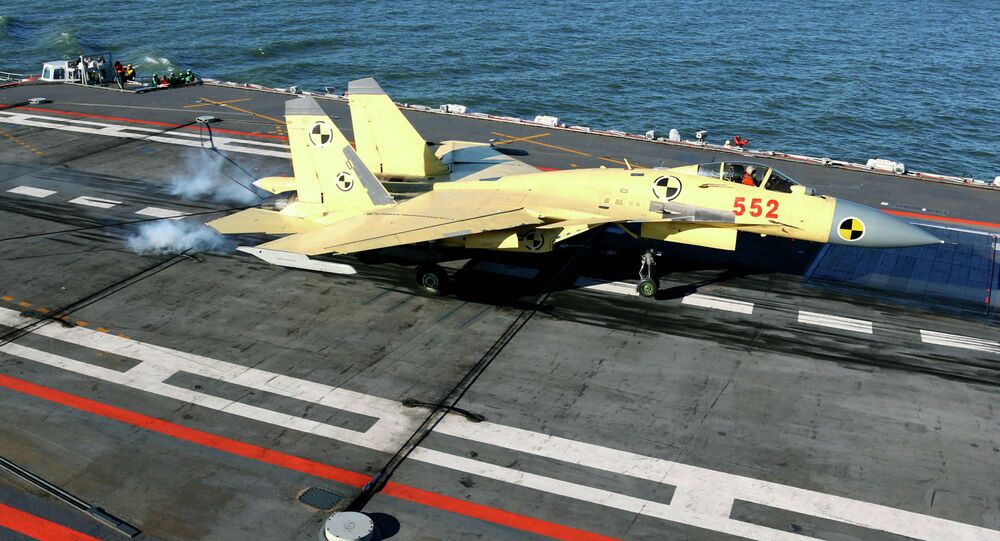 As tensions mount in the South China Sea, the country’s state television has heralded the Liaoning aircraft carrier’s expanded lethality.

© AP Photo / Zha Chunming
US Army, RAND Corporation Plan for War Against Beijing Over S. China Sea
Last week, Chinese TV boasted about the "growing combat capabilities" of its Liaoning (CV-16) aircraft carrier, noting that the battle platform can carry up to 20 fighter jets, bolstering Beijing’s balance of naval and aviation power in the Pacific rim amid growing tensions.

Last Monday’s footage revealed the Liaoning carrying eight Shenyang Aircraft Corporation (SAC) J-15 fighters, along with a Z-18 and a Z-9 helicopter, the largest number of aircraft yet seen on the carrier, suggestive of plans by China to build up its aerial presence in the Pacific Ocean.

Speaking about the J-15 fighter jets during an August 4 program, Chinese Rear Admiral Yin Zhou said, "Once all eight aircraft fly out in formation, they have a strong combat capability." He noted that the Liaoning can carry up to 20 aircraft, prompting Chinese media to further comment that the carrier exhibits "growing combat capability."

The presence of Z-18J airborne early warning (AEW) and Z-18F anti-submarine (ASW) helicopters, never before seen alongside the J-15 on the Liaoning carrier, represents a significant development in China’s joint aviation and naval capabilities, likely forming a full air-wing for the carrier.

Topping out at a speed of 1,585 mph (2551 kmh), the J-15 possesses semi-stealth capabilities, with China boasting that it is a fifth-generation weapon, with a range of 2,175 miles, providing the aircraft both the capabilities of an intercept fighter and a traditional combat warplane. Joined with the Z-18J and Z-18F helicopters, Beijing’s airpower in the Pacific is considered by some to be unrivaled.

The increased capacity of the Liaoning is substantial in the wake of a growing Chinese military presence, in response to not only the Hague arbitrational court’s ruling contrary to Beijing’s territorial claims in the South China Sea, but also demands by regional and Western governments that the administration of Xi Jinping simply rescind areas they have long held.

China has flatly stated that the Hague court has no jurisdiction in the case. Beijing also feels increasingly cornered by the Obama Administration’s "Asian pivot" and the acceptance by the South Korean regime of the deployment of the THAAD anti-missile system which China fears will lead to weapons proliferation in the region.

Beijing has told its people to prepare for war, and the state-run People’s Daily urged the regime to undertake a violent assault on Australia, for their position on the South China Sea dispute. The increased combat capabilities of the Liaoning show that if China chooses to fight, it has the technical capability to dominate on a battlefield.

Arming the Rival's Enemy: Why Modi’s Visit to Vietnam Might Irk China