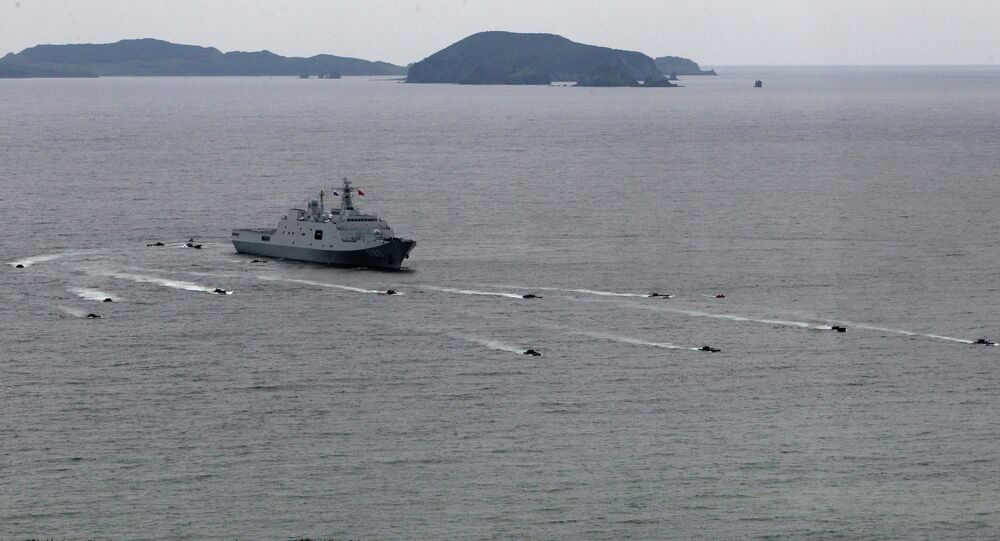 Against a background of escalating tensions between China and the United States in the South China Sea, Russia's Vzglyad newspaper lays out the factors driving Moscow's political, diplomatic and military calculations in the region.

Earlier this week, Chinese Defense Minister Chang Wanquan warned that the country's military, law enforcement and citizens must be prepared to mobilize in the event of a "people's war at sea."

According to the country's state news agency Xinhua, Chang made the statement during an inspection of coastal areas of Zhejiang Province. There, the officer emphasized that the Chinese people as a whole must be better educated about national defense and "must be prepared to mobilize and defend [China's] sovereignty and territorial integrity," including in the disputed South China Sea region.

© REUTERS / Ministry of Foreign Affairs/Handout via Reuters/File Photo
Russia, China to Hold Joint South China Sea Drills in September
Meanwhile, against the background of this latest volley in the dispute between China on the one hand and the US and its regional allies on the other, Moscow and Beijing have announced that they are preparing to hold military exercises in the South China Sea in September. According to Vzglyad columnist Petr Akopov, the symbolic significance of the drills could not be overstated.

Russia and China have carried out a total of five joint military drills in the last four years, but Joint Sea 2016, set to kick off next month, will be a new milestone, according to the journalist. This will be the first time that Russian ships from the country's Pacific Fleet will be conducting drills in the potential regional powder keg.

Last month, Akopov recalled, "the US and its allies used the South China Sea to conduct their own exercises, and the ostentatious nature of both sets of exercises is not in doubt. Russia and China are not officially allies, but have clearly demonstrated  in the last several years that they have more and more common interests and goals, and that they are prepared to work together to counter US pressure."

Washington, the journalist added, has long worked to 'contain' Russia in Europe, and China in Asia, "with the latter actually being much more important for the US. It's not just because there is no real threat to Europe [from Russia's part], while China really is staking out its own claims in the Pacific. The containment of China has been a priority of US policy for many years, and recently a pivot to the Pacific region has become an official US goal."

© REUTERS / U.S. Navy/Handout
The Real Secret of the South China Sea
The US has never ceased to be a Pacific Power, Akopov pointed out. "Atlanticism is only the name of its globalist ideology; after the Second World War, America attained a dominant position in Asia. It was here, on China's borders, that the US conducted its two largest wars post-1945: in Korea (where they fought directly against the Chinese army) and in Vietnam."

"Today too the arc of containment runs from South Korea and Japan to Taiwan, the Philippines and Singapore. US bases hem China in from the east and impede the spread of military influence in the south. Meanwhile, it is here, in the south, that China has long focused the projection of its influence; for many centuries, the Han civilization has expanded in this direction."

Of course, "this does not mean that China is preparing to take over the countries of Southeast Asia militarily." However, they do have a right, according to Akopov, "to consider these states, which since ancient times have been subject to tremendous Chinese cultural, economic and even ethnic influence, within the sphere of their national interests."

Meanwhile, for Washington, "the issue of China's containment in the Pacific and Southeast Asia is of fundamental importance; without it, all their pretensions to holding on to the status of global hegemon become meaningless."

Unfortunately for US planners, the US attempt to continue to 'contain' China is destined to fail, according to the journalist, not only because of the tide of history returning in Beijing's favor, "but also based on such 'trivial things' as Beijing's rising economic and military power," including the startling growth of its Navy.

Still, for the moment, the conflict in the South China Sea, where China, Vietnam, Malaysia, the Philippines, Indonesia and even Taiwan are engaged in a convoluted tug of war for the disputed islands, allows the US to hold its own. It is in Washington's direct interest to spur on these conflicts, according to Akopov.

© Sputnik / Artem Zhitenev
Sino-Russo Duo: China Mulls Ramping Up Its Missile Defense With Russia
The question, according to the journalist, "is whether the Southeast Asian countries understand that the Americans are deliberately engaged in stirring up trouble. Do they understand that China is their neighbor, while the US is just an outside player looking to use them for their own advantage?"

"For the most part, the answer seems to be 'yes'; after all, three countries (Vietnam, Laos, Cambodia) have experienced for themselves the relentless march of the US military machine, while another (Philippines) had long been a US colony, but even since independence has been unable to get rid of US bases on its territory. Still, these countries do have their own concerns about China's plans in the region, and Washington has something to play on."

In any case, while it remains crucial for the US to appear to demonstrate to its Southeast Asian allies that they are working to contain Beijing and safeguard their interests, "everyone understands that Washington can do very little to oppose Beijing in the region. They simply do not have the tools to pressure China, except, of course, by using the discontent of its neighbors."

With US influence on the line, in the South China Sea and elsewhere, other key players are closely monitoring developments in the disputed region. Accordingly, Akopov noted, "the US is raising the stakes," be it through veiled threats of 'consequences' for Chinese behavior, or the recent military drills in the area, involving not only local countries, but other US allies including Australia and Japan as well.

Akopov noted that for its part, "under these circumstances, Russia is demonstrating its solidarity with China." At the same time, Moscow's considered policy remains not to interfere in local disputes, "but only to emphasize that external forces should not influence the settlement of disputes between neighbors."

© Flickr / poter.simon
Asia-Pacific Pivot: US to Deploy B-1 Bombers to Guam for First Time in Decade
At the same time, the journalist noted, it is crucial for Russia also to try to prevent a permanent wedge being driven into relations between China and Vietnam, another country with a long history of good relations with Moscow.

Russia, according to Akopov, may very well come to "serve as an honest, disinterested party" in the conflict between Hanoi and Beijing over the Spratly islands, as "a country which has historically had a close relationship with both Vietnam and with China."

Ultimately, the journalist suggested that historical claims and geopolitical tectonic shifts aside, Russia informally supports China's rights in the South China Sea "because we are convinced that without an  American presence, the region will safer and more peaceful for all the nations that inhabit it, and because China's return [to major power status] is a natural historical process."