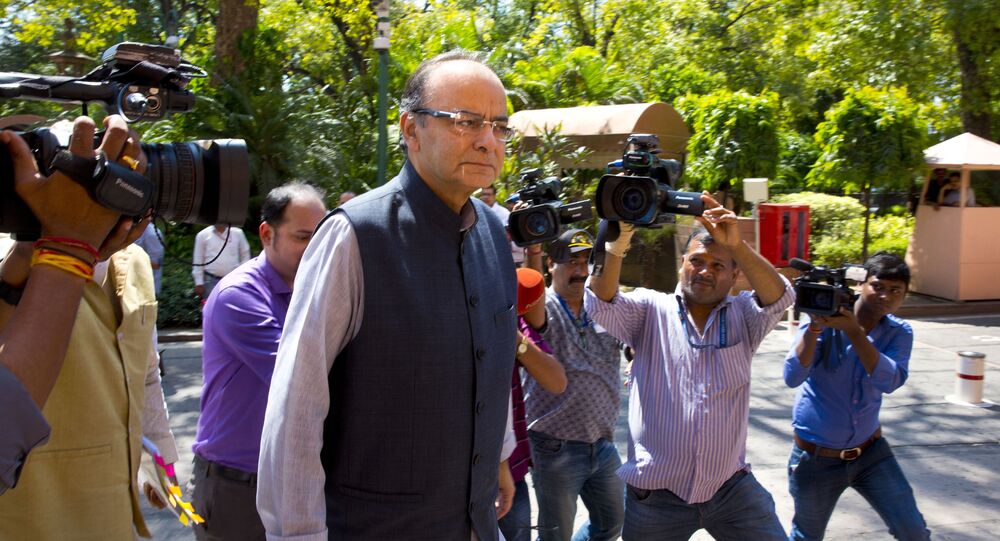 The Indian Government is hopeful that an efficient tax system will close the window of corruption and tax evasion and push India towards double digit growth.

New Delhi (Sputnik) — India is on verge of joining such nations as Australia, Malaysia, Singapore, Russia, France, and the UK with its new tax structure, namely the Goods and Services Tax (GST). GST will economically unify India into one nation for the country's 70th year of independence.

India's Lower House of Parliament has endorsed the 122nd Constitutional Amendment Bill which will pave the way for GST. Implementation requires an amendment of India's 66-year-old constitution. Despite widespread consensus among political parties, the bill has been pending since 2006. Once approved by the Parliament, the bill will need to be ratified by at least half of the states.

The idea of a #GST regime is to subsume most indirect taxes under a single taxation regime. https://t.co/EtTMjz6RZ8 pic.twitter.com/EVUVRpbV6u

Currently, India's 29 states are collecting revenue from the sale of goods with their own legislation which spreads up to more than a dozen taxes in some of the states while the Federal Government imposes another set of taxes. The Goods and Services Tax will subsume all the indirect taxes currently in use.

​It is expected that GST will provide hassle free tax payment to approximately 70 million domestic traders including multi-national companies working in India. According to the Ministry of Finance, "GST will ensure that indirect tax rates and structures are common across the country, thereby increasing the certainty and ease of doing business. In other words, GST would make doing business in the country tax neutral, irrespective of the choice of place of doing business."

The government expects that efficiency gains and prevention of leakages will bring down the overall tax burden on most commodities, which will benefit consumers. But, the government is likely to fix GST's standard rate, at which most of the goods will be taxable; at 18%, which could make some of the items like packaged foods, tea, coffee, edible oil, garments, medicines costlier, while services across the board will be increased by 3%.

© AP Photo / Channi Anand
Indian Minister Heads to Saudi Arabia to Help Stranded, Starving Workers
This could be a major setback for 90% of India's population — approximately 1.1 billion — as government surveys show that 92% of households are living on a meagre USD 150 per month.

Arguing for a lower tax rate and a capping of the standard rate, P Chidambaram, the former Finance Minister, says, "Any indirect tax falls equally on the rich and the poor. If you buy a soft drink, whether a rich person buys it or a poor man buys it, he has to pay same excise duty on the soft drink. That is why world over indirect taxes, being regressive in nature; the trend is to keep them as low as possible. People of India want a lower tax rate (GST)."

In high income countries, the standard rate of Value Added Tax is 16.8% while in emerging countries the average Value Added Tax is 14.1%.
Meanwhile, Arun Jaitley, India's Finance Minister, says that rates under GST must come down and we will strive for reasonable rates.

Over 22 People Swept Away in Indian Bridge Collapse

India to Showcase BrahMos Missile and Other Defense Products in Parliament