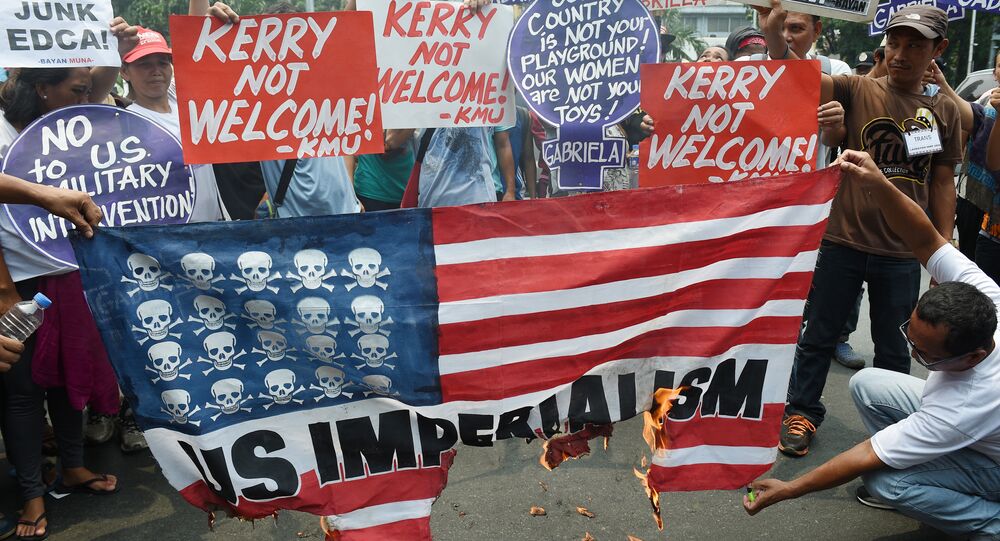 Russian political analyst Victor Sumsky has commented to Sputnik on the recent avoidance of the Southeast Asian Nations to make any direct reference to their territorial dispute with China over the South China Sea by saying that they have refused to 'commit suicide' despite US pressure and have 'demonstrated their wisdom.'

“The Association of Southeast Asian Nations (ASEAN) has demonstrated its wisdom. Anti-Chinese or pro-American positions would have meant suicide for the organization,” Victor Sumsky, Director of the ASEAN Center at the Moscow State Institute of International Relations (MGIMO University), told Sputnik.

ASEAN, the Association of Southeast Asian Nations, is a regional organization comprised of 10 member states.

Instead, ASEAN repeated that it was seriously concerned by “land reclamations and the escalation of activities” and called for “self-restraint” in the strategic waterway, including refraining from inhabiting the presently uninhabited reefs and islands of the South China Sea.

"The Parties encourage other countries to respect the principles contained in the DOC [Declaration on the Conduct of Parties in the South China Sea]," the statement stressed.

China and ASEAN then released a separate joint statement on implementing the Declaration on the Conduct of Parties in the South China Sea.

The statement said China and ASEAN had agreed to refrain from the “action of inhabiting on the presently uninhabited islands, reefs, shoals, cays, and other features and to handle their differences in a constructive manner.”

© REUTERS / U.S. Navy/Handout
The Real Secret of the South China Sea
It also underlined their pledge to respect freedom of navigation and to solve territorial disputes peacefully, through negotiation in accordance with international laws, including the UN Convention on the Law of the Sea.

Various media sources, including The Washington Free Beacon, have already called it a “diplomatic victory” for China.

“The Association holds a central position in the regional cooperation and integration processes,” Sumsky told Sputnik.

“If the Association as a whole, and not some of its member states, unilaterally tends to [cater to] one of the key players – the US or China, it immediately loses its neutrality and, hence, its central position,” the political analyst added.

“Thus the ASEAN's cautious stance on the South China Sea dispute, the position expressed in Laos, is an expression of wisdom,” he added.

Sumsky also said that this territorial dispute can’t be resolved by deferring to the recent ruling by the Permanent Court of Arbitration in The Hague.

“As long as ASEAN pursues its principle of basing its power on consensus, it remains a significant player in regional and global politics,” he said.

Kerry’s remarks came after ASEAN had been unable to agree on a joint statement criticizing China for its territorial expansion in the South China Sea.

In his comment on the statement, Victor Sumsky told Sputnik that “the US couldn’t have demonstrated more openly its engagement and political involvement in this issue.”

“It becomes only too clear that one of the ideas of US foreign policy in the region is to unite the ASEAN member states along anti-Chinese lines and to turn the Association into a part of a united anti-Chinese front in Eastern Asia,” he finally stated.

In a separate comment on the issue, Shen Shishun, a senior researcher at Asia-Pacific Research Centre of the China Institute of International Studies in Beijing, called the joint statement by ASEAN “a vital consensus.”

“The absence of the comment on the recent court ruling in the statement follows the interests of peace and stability in the region,” he wrote to Sputnik.

© AP Photo / Xinhua
Is China Set to Announce a South China Sea Air Defense Identification Zone?
“You cannot resolve the territorial dispute based on the recent ruling, instead, it only heightens tensions and thus can’t offer any solution,” he added,

Besides, he said, ASEAN member states showed support for the general course on cooperation between China and the Association. The parties have every intention to deepen this cooperation, he added.

In particular, he explained, ASEAN expresses hope for the incentive, offered by China, for “One Vision, One Identity, One Community.”

These hopes are aimed at forging further transport and communication ties, both within ASEAN and between the Association and China.

If the ASEAN member states include in their agenda the recent Hague court ruling, such cooperation is doomed to failure.

With regards to John Kerry's push for a joint statement, the political analyst points out two vectors: first is the polarity of the Chinese and US positions on the issue. The second is the attempt to urge the ASEAN member states to discuss the issue.

“It is an evident attempt of the US and Japan to speculate on the court ruling,” Shishun said.

“However the ASEAN member states do not want countries located outside the region to take part in the dispute. They urge for the peace and stability in the region,” he finally stated.