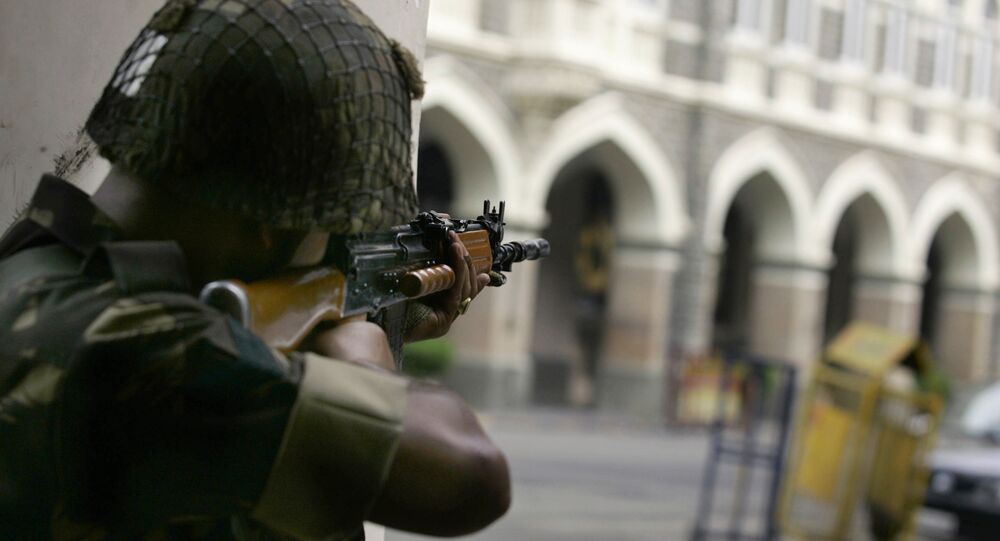 India’s Mumbai coast has become vulnerable, as regular patrolling has been stopped in the area through which terrorists entered in November 2008 and carried out a deadly terror attack.

© REUTERS / Michaela Rehle
US Reinforcing Security at Army Garrison Ansbach After Recent Terror Attack
New Delhi (Sputnik) — A Customs Department assessment report painted a bleak picture of the security scenario on the Mumbai coastal area. According to the report daily patrols have not been carried out due to the closure of the Mumbai Port Trust gates, which prevented surveillance boats berthing and going out to sea for night patrols.

"These days patrolling is not being carried out on day-to-day basis except in case of alerts," the report says.

After the Mumbai terror attack in November 2008, which left more than 160 people dead and hundreds injured, the Indian government tightened security along Mumbai's 220 km long coastline.

After the Mumbai terror attack the government also beefed up the three layered security of the coastline, including out to 5 nautical miles, guarded jointly by the Custom Preventive Wing and the Marine Police against any infiltration attempt and smuggling activity. The Indian Coast Guard is responsible for surveillance between 5 and 12 nautical miles, where as in the high seas, beyond 12 miles and up to 200 miles, is guarded by the Indian Navy.

But the lacuna in the third and inner security ring has left Mumbai city again vulnerable to the terror attacks.

© AP Photo / SANA
Terrorists in Syria Spreading Radical Ideology to Undermine Fabric of Society - Assad
More baffling is that last month the Indian Home Minister held a high level meeting of ministers and chief secretaries, along with the Director General of Police of Coastal States and Union Territories to review and strengthen coastal security, now which seems all for naught.

Therefore, in view of the prevailing security concerns around the world now it's high time that India should strengthen its security especially in coastal areas.

"Indian coasts are still vulnerable as the capacity building of the security forces along the coast has not been up to the mark. Government has recently proposed to form a Central Marine Police to protect the sea, coasts, ports and vital institutions along our coastline which is 7516 km and I think it's a good move. Apart from that we have to evolve a better mechanism for effective coordination among navy, coast guard, police and the home ministry. We have to improve our intelligence gathering and there should be coordination between the various forces and intelligence agencies," Defense Analyst, Uday Bhaskar told Sputnik.