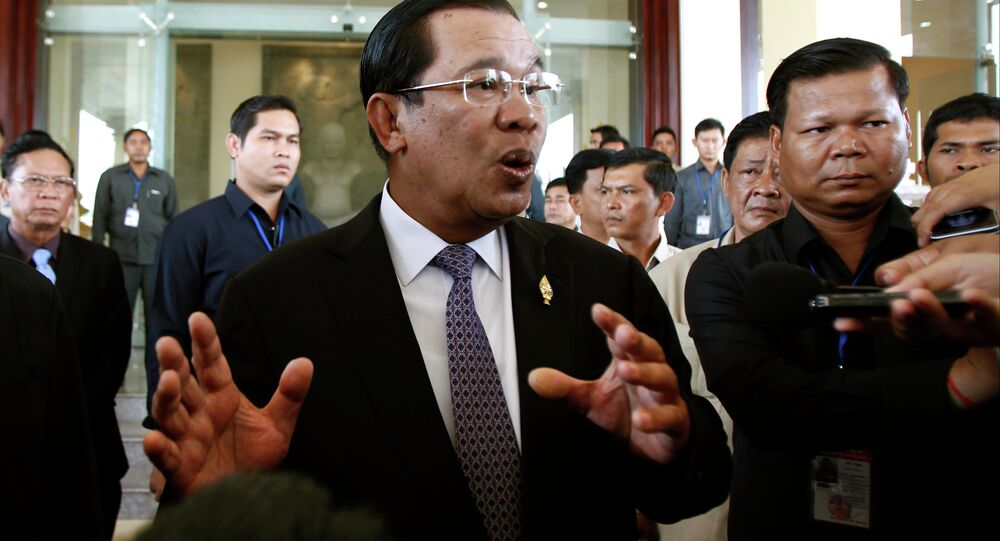 Cambodia is a 'Geopolitical Chessboard for China, US'

There have been reports about a suspected coup plot against Cambodian Prime Minister Hun Sen who has ordered a column of tanks to be moved closer to the capital. Sputnik discussed the issue with Vladimir Kolotov, a Moscow-based political scientist.

© Flickr / Army ROTC
US, Cambodia Bilateral Military Exercise 'Angkor Sentinel' Completed
Cambodia is not an exception here as in many countries outside players are looking for ways to bring to power a government they can manipulate. They did it in Ukraine and they are now trying to do it also in Syria and Turkey.

“Cambodians have seen a US-planned coup bringing General Lon Nol to power. And one by China, when the country was run by the bloody regime of Pol Pot and Ieng Sary and became a Chinese protectorate. Only recently Cambodia, under strong pressure from Beijing, came out in support of Beijing over the issue of the South China Sea,” Vladimir Kolotov said.

He still doesn’t think that Phnom Penh is 100-percent toeing Beijing’s line because many in Cambodia accuse him of being pro-Vietnamese. The truth is that Hun Sen is simply trying to pursue a balanced policy and “swim between two waters.”

As for China and the US, they both want to have their man at the helm in Phnom Penh. America is wary of China’s growing presence in Southeast Asia and is trying hard to counter Beijing’s sway over the Hun Sen government.

“As a result, Cambodia is now becoming a geopolitical chessboard for China and the United States,” Kolotov noted, adding that any growth of either pro-American or pro-Chinese forces in Cambodia would bring more pressure against Vietnam.

“Cambodia will find it hard to focus on defending its sea borders if a problem arises in the southwest. There are forces inside the country willing to claw back part of Vietnamese territory in the Mekong Delta and in the south,” he continued.

“My impression is that what is now happening in Cambodia is not an attempted coup, but rather an attempt to test the government’s response to a military takeover in order to neutralize its strong points and sally the image of loyalist generals,” Kolotov said, adding that if such a coup actually happens this would further destabilize the already volatile Southeast Asian region.