Japanese Gov't Torn Between Interests of US Military and Local Citizens

Japan’s Chief Cabinet Secretary Yoshihide Suga has filed a fresh lawsuit against Okinawa Governor Takeshi Onaga over his failure to retract his revocation of an earlier permission for the landfill work to station a US Marine Corps airbase on the southern island. 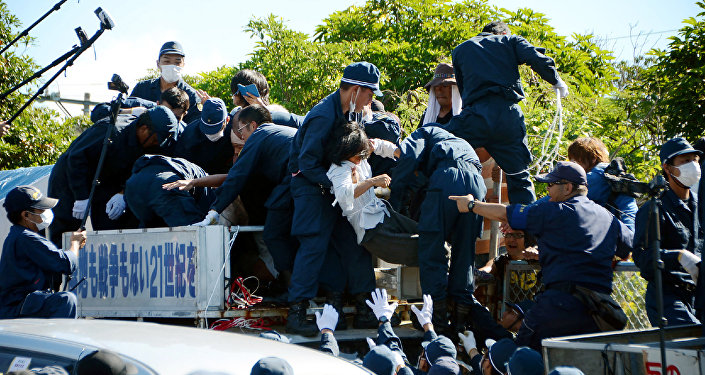 © AFP 2019 / STR / JIJI PRESS
Okinawa Residents Stage Sit-In Protest Over US Helipad Construction
The majority of people in Okinawa fear that the Futenma base could cause irreparable harm to the island’s flora and fauna and the local tourism industry, which is the island’s sole source of income.

Earlier this week Okinawans staged a series of sit-ins  protesting the resumption of the construction of six helipads. They fear that the Osprey “transformer” heli-planes could start falling down on their heads.

In an interview with Sputnik, Andrei Fesyun, a Moscow-based expert on Japan, said that Okinawa has been used by the Americans as a sort of an unsinkable aircraft carrier ever since Japan’s 1945 defeat in WWII and the  start of the Cold War between the US and the Soviet Union.

“Many in Japan don’t like this, but, on the other hand, the US forces in Okinawa ensure the country’s security, that’s why during the 1940s and 50s the locals had nothing against the sizeable US military presence on their island,” he said.

Many of them earned money working at and around the US military bases, manning local stores, restaurants and bars.

“When in 1972 Okinawa became a Japanese prefecture again, the US bases didn’t go anywhere and the overall psychological atmosphere began to change. The Okinawans were getting tired of the disproportionate presence of US military personnel on their island and the Americans’ often contemptuous disregard of the indigenous population. By the mid-1960s the situation had come to a head with local residents holding rallies protesting against crimes committed by the US military personnel,” Andrei Fesyun continued.

He added that regional authorities always side with the local dwellers in their bid to keep their American “guests” in check. In other words, to lock them up inside their bases with only occasional trips to the city.

In Tokyo, meanwhile, the government continues to view the US military presence in Okinawa as a guarantor of national security, and there have been cases of the Prime Minister refusing to meet the Okinawa governor face-to-face.

And still, regional authorities enjoy considerable freedom of hand including the right to prevent a relocation of a military base. That’s why Tokyo has to look for negotiated solutions to the conflicts that occasionally arise between the central government and local administrations.