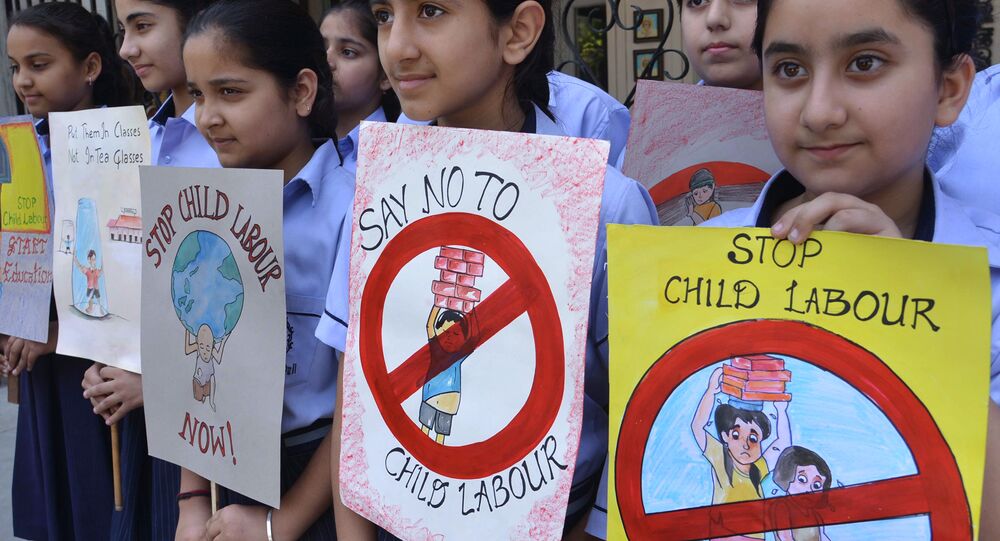 The upper house of the Parliament of India passed the Child Labor (Prohibition and Regulation) Amendment Bill on Tuesday, which prohibits any employment of children below 14 years, excluding family businesses.

© AP Photo / Rajanish Kakade
India's Largest Hindu Organization Targets Terrorists by Talking to Teens
In 1986, India enacted a law to protect children from forced labor and exploitation, the 1986 Child Labor Act. The law, which still remains in force, only prohibits employment of children below the age of 14 in hazardous occupations, a list of which is specifically defined. Children above 14 are allowed to legally work in such industries.

In attempt to liberalize the law, the Parliament's upper house (Rajya Sabha) on Tuesday passed the Child Labor (Prohibition and Regulation) Amendment Bill, which prohibits employment of children below 14 years in all occupations except where he or she helps with a family business during non-school hours or helps his or her family in the fields, engages in home-based work, forest gathering or attends technical institutions during vacations for the purpose of learning. The law defines children between 14 and 18 years as "adolescents" and bans their employment in any hazardous occupations.

© AFP 2020 / MANJUNATH KIRAN
Indian Schoolchildren Urged to Rebel for Innovation in Education
The Bill also provides for tougher policies towards violators: the penalty for employing a child entails imprisonment, a fine or both. Prison sentences range between six months and two years (up from three months to one year). Fines would cost 20,000-50,000 Indian Rupees (US $298-$745), up from 10,000-20,000 Indian Rupees (US $149-$298).

According to nationwide survey results released in 2014 by India's Ministry of Statistics and Program Implementation, the number of working children between the ages of five and14 was estimated at 4.98 million (or less than 2% of the group) in 2009-2011. The child labor problem is not unique to India; worldwide, about 168 million children work, and more than half of them, 85 million, do so in hazardous industries, the report of UN's International Labor Organization reported.