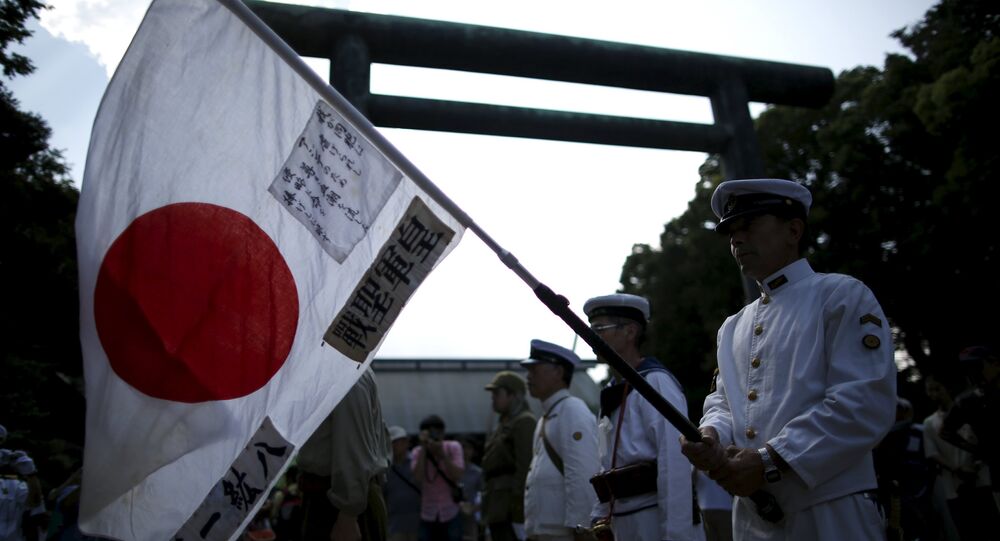 With Japan’s ruling Liberal-Democratic Party having secured a majority in the upper house of parliament, Sputnik asked Tamotsu Sugano, the author of a bestselling book about Nippon Kaigi, to say a few words about this influential conservative group, which is pushing for the Constitution to be revised to allow a more active military.

© AFP 2021 / KAZUHIRO NOGI
Will Japan's Prime Minister Give in to the Allure of Arming the Country?
“Nippon Kaigi is often described in the media as the country’s biggest rightwing civic union of some 38,000 members and I fully agree with his description,” said Tamotsu Sugano, whose book “What Nippon Kaigi Is All About” came out in April to become an immediate bestseller.

In an exclusive interview with Sputnik Tamotsu Sugano said that Nippon Kaigi’s political agenda of restoring the status of the emperor, rewriting Japan’s 1947 Constitution and rebuilding the might of the armed forces, was 100-percent nationalistic.

“On the other hand, you can’t be sure about their impact on the policies of [Prime Minister Shinzo] Abe. With many in the Cabinet being either members of Nippon Kaigi or sharing their views, this could have a certain impact of course, but I don’t think their membership is large enough to guarantee the LDP enough votes during elections,” he added.

Nippon Kaigi’s allied People's Association for Creating a Constitution for Beautiful Japan sticks to a similar ultraconservative agenda and some of its members hold senior positions in both organizations.

“Neither of these two is pretty much specific about the way the Constitution should be amended. Some want to scrap Article 9, which renounces war and prohibits Japan from maintaining a war potential, while others demand a constitutional provision allowing the imposition of a martial law.”

There is one thing, however, that brings them together, however, and this is their hatred towards leftwing groups and the idea of women playing a role in public life.

Mentioning Nippon Kaigi’s religious affiliations, Tamotsu Sugano said that the organization was an umbrella for various anti-Communist and anti-liberal religious associations and groups.

“Nippon Kaigi is a union of different religious societies, rather than a religious organization per se,” he added.

With the current surge in elderly population and the resulting drop in the number of working people, trade unions and farming cooperatives are no longer able to serve as a reliable support base for political parties, which now have to rely more on religious societies where the percentage of elderly members is usually smaller than in other social groups.

This is exactly why the ruling Liberal Democratic Party is now seeking the support of both Nippon Kaigi, which is essentially a union of religious societies, and of LDP’s junior coalition ally, the moderately conservative Komeito Party, which did well in the 2000 and 2001 parliamentary elections.

Moreover, with major opposition-minded public organizations now losing their clout, the LDP’s win of two-thirds of seats in the upper chamber of parliament did not come as a big surprise.