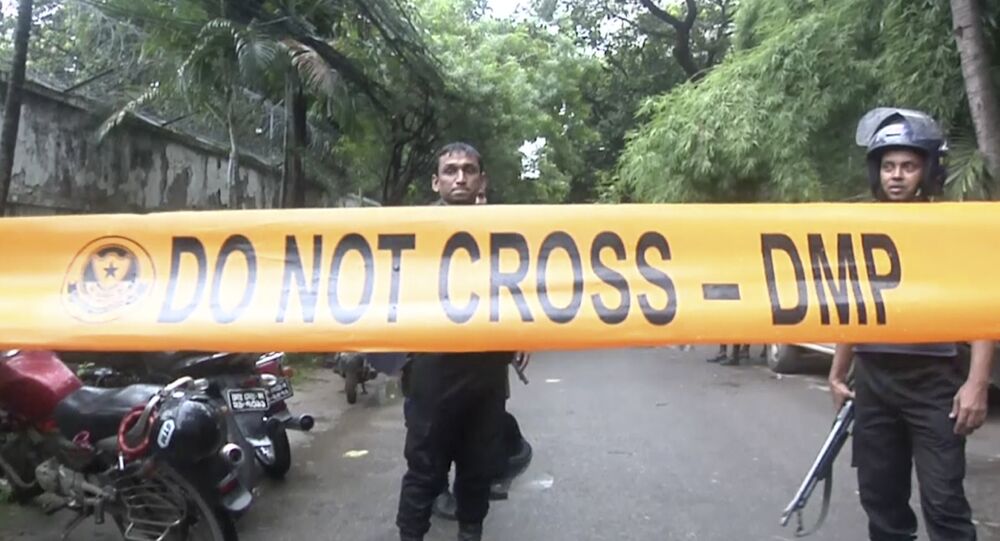 Security has been beefed up outside the alleged Dhaka attack motivator Zakir Naik’s house in Mumbai.

© AP Photo / Anupam Nath
Daesh Medina-Style Terrorist Attacks on Mosques Foiled in India
Security forces have been deployed outside the house of Islamic preacher and scholar Zakir Naik following a protest outside his residence in Mumbai.
Zakir Naik has been caught in the middle of a controversy after Bangladesh alleged that his preaching and ideology inspired Rohan Imtiaz, one of the terrorists of the recent terror attack in Dhaka in which 20 people were hacked to death.

Zakir Naik’s name has also been linked to the alleged Daesh suspects arrested recently in Hyderabad by the National Investigation Agency (NIA). The leader of the terror module Mohammad Ibrahim Yazdani had revealed to the NIA during interrogation that his inclination towards Daesh was also because of Zakir Naik.

This has led to outcry for the arrest of Naik for his alleged role in inspiring terrorists in the South Asian region.

Doctor turned Islamic scholar and preacher, Zakir Naik is already a persona non grata in several countries such as Britain, Canada and Indonesia for his hate speech aimed at other religions.

WHY ARE THE MUSLIMS NOT UNITED IN CELEBRATING 'EID ON THE SAME DAY IN THE SAME CITY? https://t.co/nu68K2pGw2

Zakir Naik, during one of his lectures in his Peace TV, an international Islamic satellite channel, had reportedly urged all Muslims to be terrorists. Zakir Naik is extremely popular in Bangladesh due to his Islamic preaching on Peace TV.

The Indian government is concerned about the hate speeches of Naik after it became known that his sermons inspired Dhaka killers and the leader of the Daesh suspect in India.

“Naik’s speech is a matter of concern for us. Our agencies are working on this,” Indian Minister of State for Home Affairs, Kiren Rijiju told media.

Can’t announce now, after investigation you will find out how seriously Govt is taking this: K Rijiju on Zakir Naik pic.twitter.com/AYW6tlVqOu

Terror has no religion or region, it is a threat to the humanity. Entire world must unite together: I&B Minister pic.twitter.com/y7zyklbpqm

The Indian government has entrusted the National Investigation Agency (NIA) to examine Zakir Naik’s speeches and activities. The NIA will interrogate him after his return from Mecca.