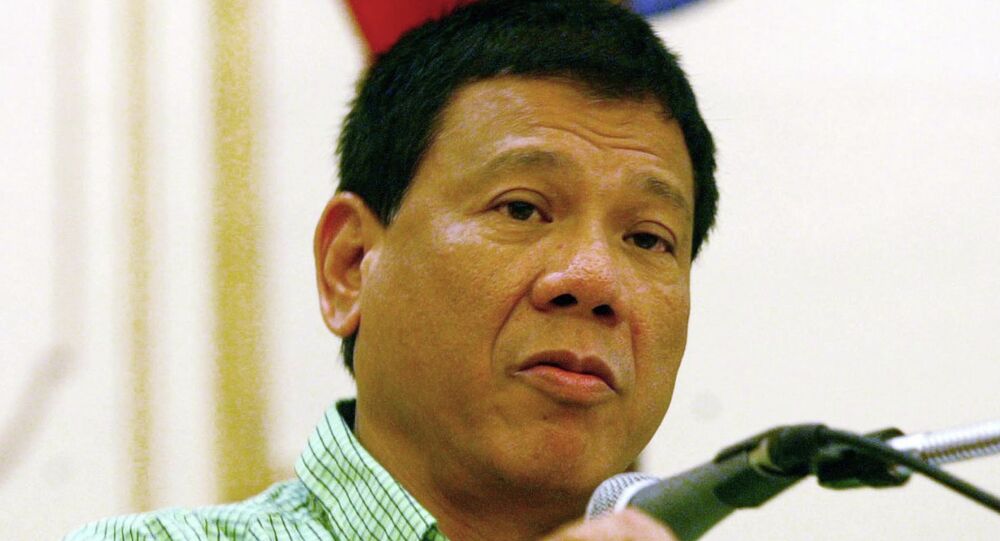 Perhaps the so-called iron hand of Philippines President Rodrigo Duterte’s administration is not so oppressive after all: harsh policies toward drug dealers have caused thousands to voluntarily surrender to police.

© AP Photo / Aaron Favila
'The Punisher': New Filipino President Vows to Revive Death Penalty
President Duterte has given the impression of being a leader in the strongman style. In speech and in decision-making, he resorts to radical and blunt forms of communication. His policies, wrapped in harsh, occasionally obscene language, nonetheless resulted in his election to the presidency.

The Philippine president has expressed a special antipathy toward drugs and those that use, sell and manufacture them. During his term as mayor of the city of Davao, he implemented notorious "Davao death squadrons," vigilantes who hunted down criminals and drug dealers. Between 1998 and 2005, at least 300 people were reportedly killed by these "death squadrons."

During a press conference on May 31 in Davao, Duterte called for citizens to take the law into their own hands, and kill drug dealers themselves.

"If one of them lives next to you, please call us or the police, and if you have weapons — just kill them themselves… Kill a drug dealer and I'll give you a medal," he has been quoted as saying.

When asked about what he would do if he discovered one of his sons had taken drugs, he said, "I'll kill him myself."

The politician reportedly warned 15 Philippine city mayors allegedly linked to drugs that they would be treated like ordinary criminals. Additionally, his organization has stated that 12 suspected drug lords were killed in gun battles with police, or under unknown circumstances since June 30th.

As a result of these and other moves by the government, some 2000 drug pushers and drug addicts have been reported as turning themselves in since July 1.

According to sociology professor Dr. Adrian Semorlan, this is an indication that high-profile protectors of drug pushers have abandoned them.

"Small-time drug pushers and users felt that their protectors abandoned them so they feel the best thing to do is to surrender to save their life," Semorlan said.

© Sputnik / Sergei Guneev
Putin Has Made Strong Leadership a 'Trend' Across the Globe
The surrender of drug users and pushers appears to confirm Duterte's earlier statements of possible ties between public authorities and drug lords.

While the surrender appears to indicate a success for Duterte's harsh policies, psychology professor Jennifer Composa of Western Mindanao State University observes that the government must develop an effective rehabilitation program for drug addicts, as suddenly living a "normal" life again could present challenges that cannot be overcome.

Duterte's administration, and some experts, consider his harsh policies necessary, as the drug situation in the Philippines is said to be dire. In 2009, the country's Dangerous Drugs Board estimated 6.9 million drug users in the nation, close to 7% of the population. According to Senator Vicente Sotto, a legislator working primarily against drug abuse, those estimates could be much higher.

The Philippines have been observed to be, according to some, a steadily increasing drug-exporter, with methamphetamine manufactured in the nation reportedly making its way to Australia, Canada, China, Japan, Malaysia and South Korea.

Law or Politics? Philippines Urged to Ignore Hague Ruling and Talk to China

Philippines Aims to Work on Creation of Russia-ASEAN Scientists Network