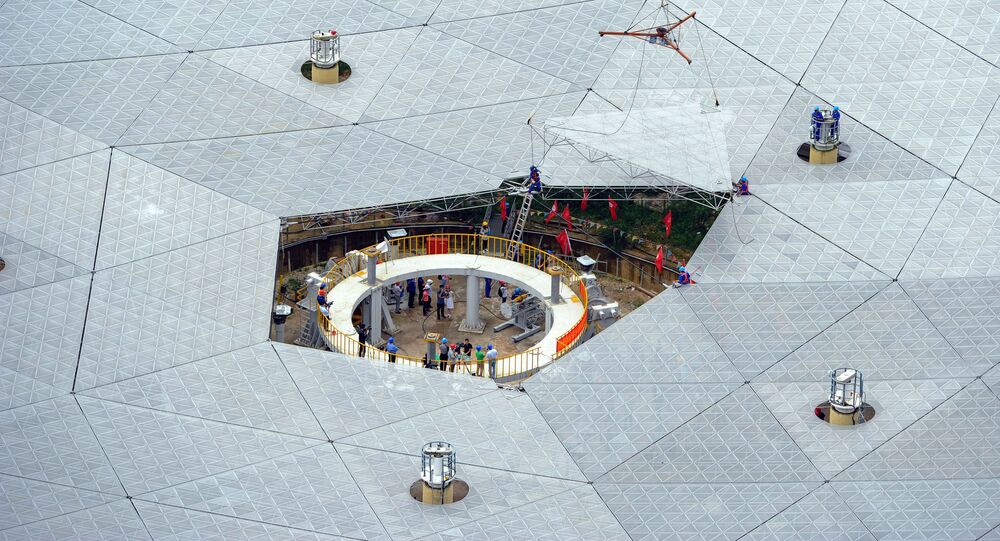 China's scientists are ready to study deep space after placing the final panel into the Five-hundred meter Aperture Spherical Telescope (FAST) on Sunday.

On Sunday morning engineers in Pingtang County, southwest China's Guizhou Province, placed the last of the telescope's 4,450 panels into position.

Construction of the $180 million, 500 meter telescope began in 2011, and it is now set to begin observing the universe this September.

FAST is evidence of China's increasing investment in science – it is now second only to the US in terms of research spending and the number of scientific papers published.

The project's scientists said FAST will be able to help research on gravitational waves, and further the search for alien life.

"FAST's potential to discover an alien civilization will be 5 to 10 times that of current equipment, as it can see farther and darker planets," said Peng Bo, director of the NAO Radio Astronomy Technology Laboratory.

With a 500 meter diameter, FAST's curved dish is much larger than the 305-meter Arecibo Observatory in Puerto Rico, which was built in 1963 and was previously the world's previous biggest radio telescope.

Peng added that FAST is ten times more sensitive than the steerable Effelsberg radio telescope at the Max Planck Institute for Radio Astronomy in Germany.

© AFP 2020 / NASA
Into Deep Space: China to Build Telescope With Field View 300 Times Larger Than Hubble
For the first two years of operation FAST will be used by Chinese scientists doing early-stage research, after which its data will be available to scientists worldwide.

The telescope's large size means it will be able to collect more of the radio waves emitted by objects in deep space.

These waves have extremely long wavelengths, ranging in length from about a millimeter to more than 100km.

As well as extraterrestrial life, FAST will try to pick up ancient signals of hydrogen, one of the main building blocks of the Universe, to try to understand its formation.

It will also search for new stars, in particular a rapidly rotating neutron star called a pulsar (pulsating radio star) that emits a beam of electromagnetic radiation.