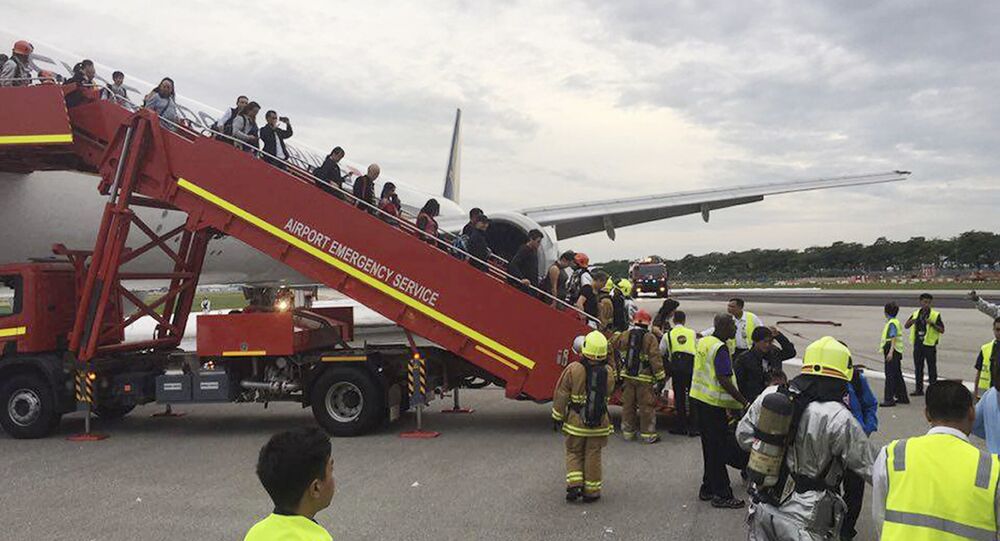 All passengers are safe after a Singapore Airlines jetliner caught fire on Monday morning at the Changi Airport.

The Boeing 777-300ER was on it’s way from Singapore to Milan when the pilot had to return for landing at Changi Airport over an engine oil warning message. The commercial airliner arrived back at the airport more than four hours after their initial departure — and the moment it landed the engine burst into flames.

Passengers onboard the aircraft were frightened and panicked, but luckily the flames were extinguished within minutes.

“When we could see the flames rising, some people were trying to remove their bags from the overhead compartments, which was crazy,” passenger Amit Jain, 44, recalled to Today Online. “I heard a few people scream ‘Open the doors!’ and ‘Let us out!’ and they were standing in the aisle. I had to tell a lady, ‘if I had to run out I’m going to have to kick your bag out of the way’.”

Jain recalls that passengers and crew were not allowed to evacuate while the firefighters used a mixture of foam and water to combat the flames.

“The foam was close to waist-deep for the firefighters,” he recalled. “The pilot came on the public address system a couple of times to tell passengers to stay calm and that fire was being put out.”

A statement from the airline following the incident confirmed that no injuries were reported.

“All passengers and crew on board disembarked safely. No injuries were reported,” the statement said. “The affected aircraft has been towed away and the clean-up of Runway 2 is underway.”

Prime Minister Lee Hsien Loong took to Facebook after the incident to thank the emergency responders and confirm that they will be investigating the incident.

“Thanks to SQ and Changi Airport for the swift response. SQ and CAAS (Civil Aviation Authority of Singapore) are investigating the cause, and will get to the bottom of the matter.”

US Crew in Trouble Over Mutiny on Norwegian Airplane During Snowstorm