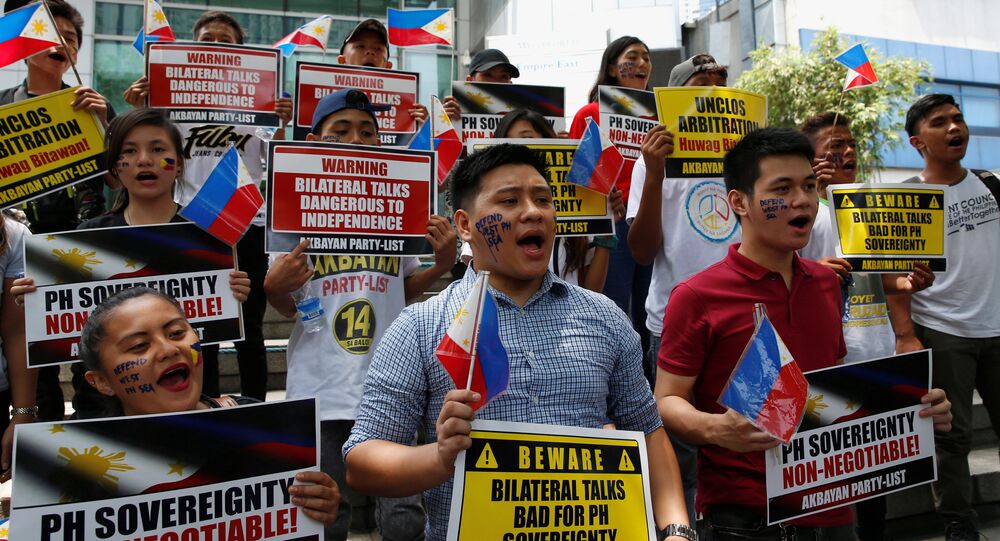 The Hague-based arbitration panel is due to decide on the Philippines's lawsuit against China over its allegedly illegal actions in the South China Sea in the near future; this will be the first time an international court takes a decision on the matter.

© AP Photo / Emily Wang
China's Stance on Disputed Islands: Japan Needs to Do More for Peace
A case brought by the Philippines against China over its illegal actions in the South China Sea will soon be handled by The Hague-based arbitration panel, an unprecedented move by an international court in relation to an issue of this kind.

The lawsuit was filed in 2013, a year after China actually took control of the Scarborough Shoal atoll, located 140 miles from the Philippines and, within its 200-mile exclusive economic zone, according to Manila.

© AFP 2021 / Kazuhiro NOGI
Rising Tensions: Japan Deploys Additional F-15s Close to Disputed Islands in S China Sea
However, there are a number of other countries which have also claimed the area, namely Taiwan, Vietnam, Malaysia and Brunei.

If The Hague court decides that China violates international law, the criticism from the international community will inevitably intensify. However, Beijing is unlikely to adhere to any decision that will infringe upon its interests, something that Manila will surely use to score points against Beijing for ignoring decisions by international institutions even on minor issues.

How to fight a war:
Canada vs Denmark, Hans Island. pic.twitter.com/fiz8NpfMOd

Meanwhile, there are hundreds of simmering territorial disputes across the world with some of them grabbing the global headlines, including the spat between China and Japan over the chain of uninhabited Diaoyu/Senkaku islands, and others which are rarely mentioned in global media.

In this regard, it is worth mentioning the squabble between Canada and Denmark over Hans Island, an uninhabited speck of rock in the Arctic Ocean. The island is 0.5 square miles, or 1.3 square kilometers.

In the early 1970s, the two countries agreed on the demarcation of maritime borders in the Arctic, but remain at odds over the status of the tiny island.

© East News / Kyodo
Tokyo Sets Up Military Base South of Islands Claimed by Japan, China
Both sides have sent inspection ships to the island, where they hoisted their national flag, dismantling that of the other side, among other shows of protest.

The conflict was raised to a new level in 1984, when the Danes left a bottle of schnapps at the foot of the flagpole with a note that read "Welcome to Danish land!" Shortly after, they received a symmetrical response in the form of Canadian whiskey. Since then, the two NATO countries have been fiercely struggling for the empty island, not forgetting to leave each other "gifts" at every opportunity.