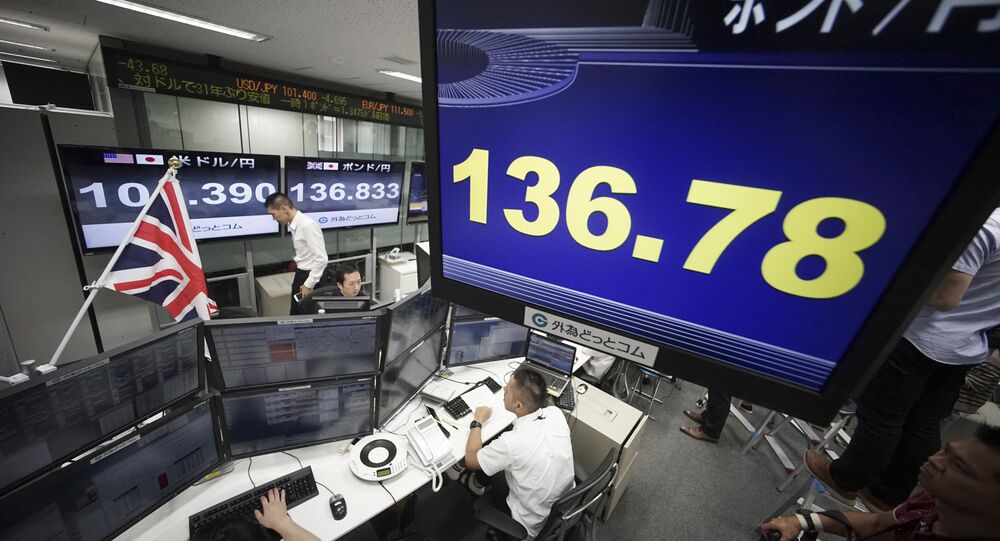 Brexit's effect on the Japanese economy will be temporary, but its long-term effect on the EU will have a great impact on Japanese trade, Professor Andrey Fesyun from Russia's Higher School of Economics told Sputnik.

© Sputnik / Alexander Liskin
'Inevitable Cooperation': Why There's More to Russia-Japan Relations Than Kuril Islands
The United Kingdom's exit from the European Union will have a limited effect on Japan, however the domino effect and eventual break-up of the EU will have a great impact, Professor Andrey Fesyun from the Russian Higher School of Economics' School of Asian Studies told Sputnik.

As news broke on Friday that the UK had voted to leave the EU, the Japanese yen briefly surged to 99 to the dollar, its highest level since Abenomics began in November 2013. The Nikkei 225 index plunged by 1,286 points, or 7.92 percent, the biggest dive in 16 years.

As the yen surged, Japanese Finance Minister Taro Aso told reporters in Tokyo that the Japanese government is ready to intervene to stabilize financial markets.

"We are very concerned about the risks this will have on the world economy, finance, currency markets and other areas," Aso said.

"In the foreign exchange market, we are seeing some very nervous moves, and so that these kinds of moves don't continue, we are watching it with a sense of concern that is higher than before, and we will respond properly if needed," Japan Times reported.

Fesyun told Sputnik that Japan need not be more worried than other countries about the consequences of Brexit, but that a greater danger lies on the horizon.

"It won't affect Japan more than the other countries of the world. Yes, today it has led to turmoil in the stock market and a rise in the yen against the dollar. But this, you could say, is a little 'shake,' which will stop. It's not a crisis. For Japan, crises in the US or Asia, particularly China, are dangerous, and there nothing terrible is happening yet."

© Flickr / Japanexperterna.se
Currency Spotlight: Yen’s Rise May Signal Upcoming Trade Disruptions
As well as a rising yen giving them less income from exports, Japanese exporters have another worry. Some Japanese manufacturers, such as Nissan, have production facilities in the UK, and Brexit means their products will be subject to customs duties in the EU. For example, a tariff of 15 percent will be placed on cars.

"That's why the Japanese Central Bank's decision on whether to make currency interventions will depend a lot on whether there is big pressure from companies like Toyota and Nissan."

Fesyun said that Japanese carmakers have diversified car assembly around the world, so they are able to hedge some of the negative effects of a strong yen. However, he said that a bigger issue for Japanese trade is not the strength of its currency, but the state of the European Union in the aftermath of Brexit.

While the fate of the United Kingdom will have a limited effect on Japan, he said that Brexit's consequence for the EU presents a greater danger.

"It must be understood that the issue is not Great Britain, but that this is a harbinger of the collapse of the EU. It won't happen soon; maybe it will take 10-15 years, but it has already happened, and everything that is unfolding in the Japanese market has to be considered from this point of view," Fesyun said.

"In any case, the EU in its current structure will probably not exist, and all Japan's long-term plans and financial calculations have been based on the free market and free movement of goods in Europe. Japan will have to review a whole range of relations with it (Europe). I can't see any other consequences for Japan."