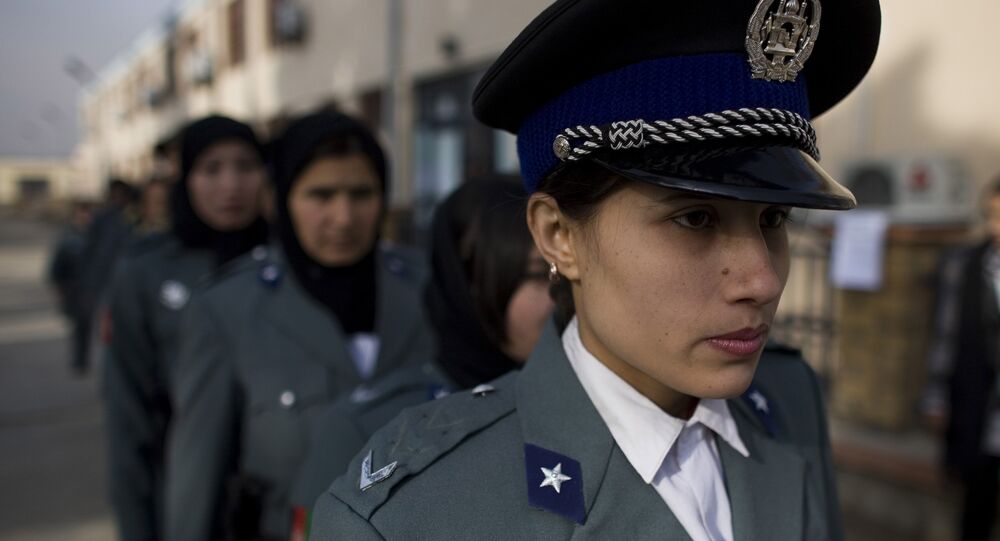 A large number of unresolved crime cases of last year is making Afghanistan’s Ministry of Internal Affairs take measures to improve this statistic. One such measure is to increase the number of women in Afghanistan’s police ranks.

Women were assigned to 41 positions. Officially, it was stated that the need to create such a unit was to gradually equalize the number of men and women in law enforcement bodies of the Islamic Republic and to prevent many cases of violence against women in Afghan society.

Today, peace in Afghanistan is protected by 2,875 female police officers who are involved in the fight against terrorism and drug trafficking.

It is obvious that there is a need for more women in the Afghan police ranks. The challenge for the Ministry of Interior is to recruit 10,000 women by the end of March 2017.

Deputy Spokesman of Afghan’s Ministry of Foreign Affairs, Najib Danesh, spoke to Sputnik in an interview shedding some light on this situation.

“Increasing the number of women in our ranks is the priority of departments today. It is important that they are trusted in solving key challenges related to security in the country. In fact, there are a number of cases today that are impossible to investigate without the participation of women.”

“We use our beautiful ladies at police checkpoints, in investigation services of anti-drug operations. They are not given any concessions. They work on conventional shift schedules and often they have to work at night,” Danesh said.

The spokesperson further said that women are also trusted in high-risk cases. He expressed hope to increase the representation of women in the Ministry of Interior as it will help in moving forward with establishing order in a number of Afghan provinces.

© AFP 2021 / JIMIN LAI / AFP FILES
India Will Spare No Efforts to Rescue Abducted Indian Woman in Afghanistan
It is definitely not an easy task for women in Afghanistan to serve as police officers. There are many taboos and at times they are stopped by their own family due to the high risk and dangerous nature of the job.

“In order to change the views towards serving in police forces, the Ministry of Internal Affairs is conducting a special operation. It is a special program for those who wish to promote this kind of material. In addition, we do not place newcomers in the most difficult posts,” Danesh said.

“We have training camps where candidates undergo physical training. During this training the women, unlike men, are paid a salary, they live in comfortable dormitories and they eat well,” the spokesperson said.

According to the official statistics, tens of thousands of women are currently studying and working in various fields across Afghanistan.

It is worth mentioning that not all of the provinces have a similar situation. The women usually get jobs that are situated in their home province as to not get separated from their families.

In order for women to join the police ranks they have to be over the age of 18, they must have a document of secondary education (12 years of education) and they should be physically fit and mentally stable, Danesh concluded.