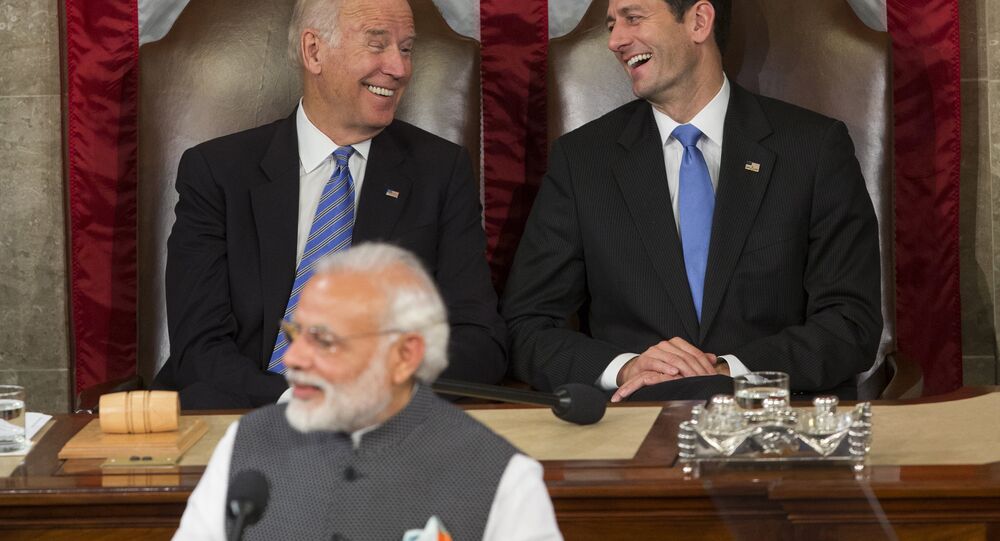 India's latest move in the direction of implementing a nuclear energy pact with the US is gaining strong resentment as the US reactors are most likely to cost three times more than that of Russian reactors already well operational.

© AFP 2020 / MONEY SHARMA
Can India Overcome China’s Objections to Become a Key Nuclear Nation?
The Indian government's commitment to expedite the formalities of a deal allowing America's Westinghouse Electric to set up six nuclear reactors in India is drawing flak for being commercially nonviable. The proposition was part of the talks between Indian Prime Minister Narendra Modi and US President Barack Obama during the former's latest visit to the US.

Many are questioning the rationale behind such a commitment as installing nuclear reactors manufactured by Westinghouse would overshoot the cost of Russian reactors already in operation at Kudankulam of Tamil Nadu.

Amit Bhandari, Energy Expert and India's leading think-tank Gateway House told Sputnik, "Considering the cost of a reactor that Westinghouse is building in the US, cost per megawatt works out to $7.5 million while the approved cost of Kudankulam Unit 3 & 4 is $2.9 million. So there seems a strong likelihood that the cost of Westinghouse reactors will exceed that of the Russian reactors in India." Russia's Rosatom operates two reactors at Kudankulam, in Tamil Nadu.

Meanwhile, one of India's major political parties — the Communist Party of India (Marxist) — is also skeptical of the viability of projects involving western nuclear reactors. A CPI (M) statement says "The cost of the AP1000 reactors are going to be prohibitive, just as the French Areva reactors to be set up at Jaitapur (Maharashtra). By a conservative estimate, it is going to cost more than USD 42 billion for the six reactors. The cost of power produced from these reactors is going to be unsustainable."

"Solar and wind energy are already cheaper than nuclear power in India — in this scenario, any new nuclear project has to be evaluated for its commercial viability, otherwise we risk ending up with a white elephant," says Amit Bhandari.

© AP Photo / Ajit Kumar
Quid Pro Quo: Will US Broker a Nuclear Deal Between India and China?
India and Westinghouse haven't discussed commercial terms, including the price of reactors. Nonetheless, a joint statement released after the meeting between Indian Prime Minister & the US President Barack Obama states, "Both sides welcomed the announcement by the Nuclear Power Corporation of India Ltd, and Westinghouse that engineering and site design work will begin immediately and the two sides will work toward finalizing the contractual arrangements by June 2017."

The reactors were originally planned to be built in Gujarat, but opposition by locals over land acquisition forced the authorities to relocate the project to Srikakulam in Andhra Pradesh. However, resentment is high among locals in Srikakulam as well. Farmers have threatened to protest if their demands for a higher compensation are not met.