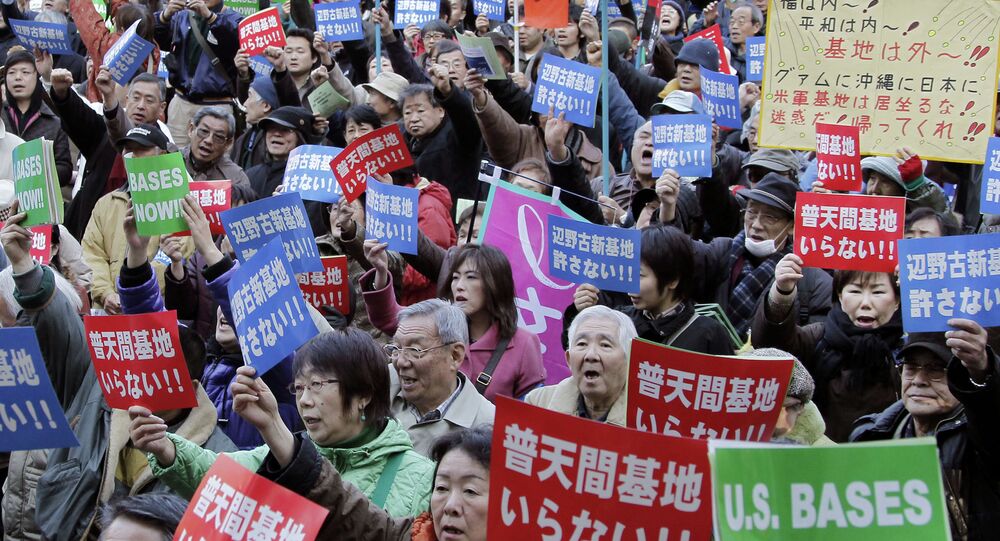 Over 100 people marched through Tokyo in anti-US protest following a series of accidents involving US military personnel.

A mass protest march involving over 100 people took place in Tokyo on Sunday. Protesters marched through streets of downtown Tokyo, holding banners saying "no more base."

Tensions over the US military presence in Japan were fueled by a series of crimes conducted by US military personnel, including rape, assault, and hit-and-run accidents. In the most recent accident, a US navy servicewoman Aimee Mejia injured two local civilians while driving drunk down the wrong lane of the road. Her blood alcohol level was found to exceed the allowed limit sixfold.

Earlier in May, 32-year-old former US Marine Kenneth Franklin Shinzato was arrested on suspicion of stabbing and strangling a 20-year-old Japanese woman, identified as Rina Shimabukuro, near the base.

More than half of 47,000 American troops in Japan are stationed on the island of Okinawa, which hosts about 75 percent of all US bases in Japan (by land area). The US command planned to relocate the Okinawa base from a densely populated area of the island to a more deserted one, but had to abolish the plan because of strong local resistance.

Since 1995, after the abduction and rape of a 12-year-old girl by three US servicemen, the Command has struggled to tighten the discipline of American troops, including declaring curfews and, more recently, banning alcohol consumption for US servicemen. However, after a decade of taking measures, criminal incidents continue to keep occurring.

US Envoy to Japan Apologizes For US Military Drunk Driving Incident