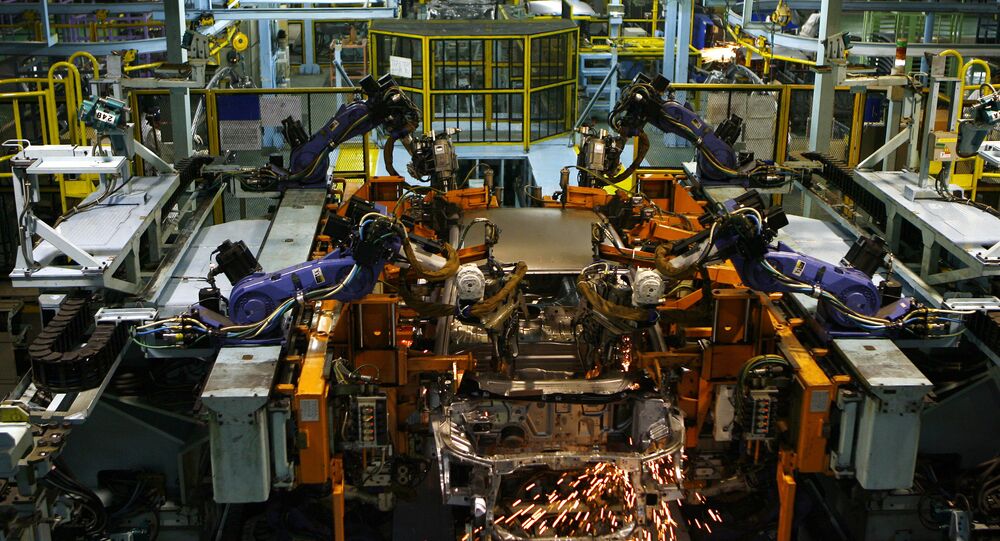 India's Central Bank Governor Raghuram Rajan has cautioned that robots are replacing human workers at an alarming rate, especially in the manufacturing sector, which could create political turmoil in emerging economies like India and Vietnam.

"The emerging threat is: It is not the guy sitting in Bangalore but the robot next door which is going to take your job, and this creates enormous anxiety among the middle class. You can see this in the political dialogue that is taking place in the US as well as in the run-up to Brexit in Britain."

"Every country sets out by first making textiles and apparel, before moving on to the simple assembly of electronic products and then proceeding along the ladder of growth to higher-order products. What will happen to countries like Vietnam, the Philippines and India if that ladder for steady growth is removed, when its export-driven aspect is just taken away because industrialized countries can produce things just as cheaply? The worry is that if a large segment of the middle-class becomes disempowered and is looking for easy solutions in country after country, could it create conditions for more political turmoil? " asked Rajan.

Rajan's statement is being taken seriously in India as well, because despite growing at a pace of almost 7.6% in 2015-16, the Labour Bureau reported that job growth had slumped to a six year low: only 100,100 million in 2015.

@PMOIndia Proud to know it sir. Siri also tells 17.9 million jobless people in India.. How to address them!! https://t.co/PhzLxP3GWZ

​However, Secretary of Economic Affairs Shaktikanta Das told Sputnik, "I will not go into the numbers, but when the manufacturing, industry and services sectors are growing then I think it's a positive development. I don't see any basis for such (jobless growth.) The Department of Economic Affairs under the Ministry of Finance is analyzing Labor Bureau data because the data is coming from so many sources."

© AFP 2021 / MONEY SHARMA
Can India Overcome China’s Objections to Become a Key Nuclear Nation?
A recent report released by HDFC Bank says, "Data from the International Federation of Robotics show that since 2010, the usage of industrial robots has accelerated considerably. The average growth in robot sales between 2002 and 2014 was 15% per annum. Compared with average growth in the global industrial output, a high degree of automation in recent years has aggravated the risk of jobs being replaced by capital-intensive techniques."

Recent reports suggest that Wipro, one of the biggest IT firms in India, will use its artificial intelligence platform Holmes, which is likely to replace 3,100 engineers in the company. Apart from manufacturing companies, mainly automakers and software companies are also replacing humans with robot to save money and time. This is evident from the fact that net recruitment in India's top three software companies like HCL Tech, Wipro and Tech Mahindra shrank during January-March this year. Wipro has recently started using robots in helpdesk recruitment cell.

Russia's 'Sputnik' Heart Could Save Thousands of Lives in India

Quid Pro Quo: Will US Broker a Nuclear Deal Between India and China?

Unique TVs to Drive Mosquitoes Away in India

US Returns 200 Artifacts Worth $100 Million to India