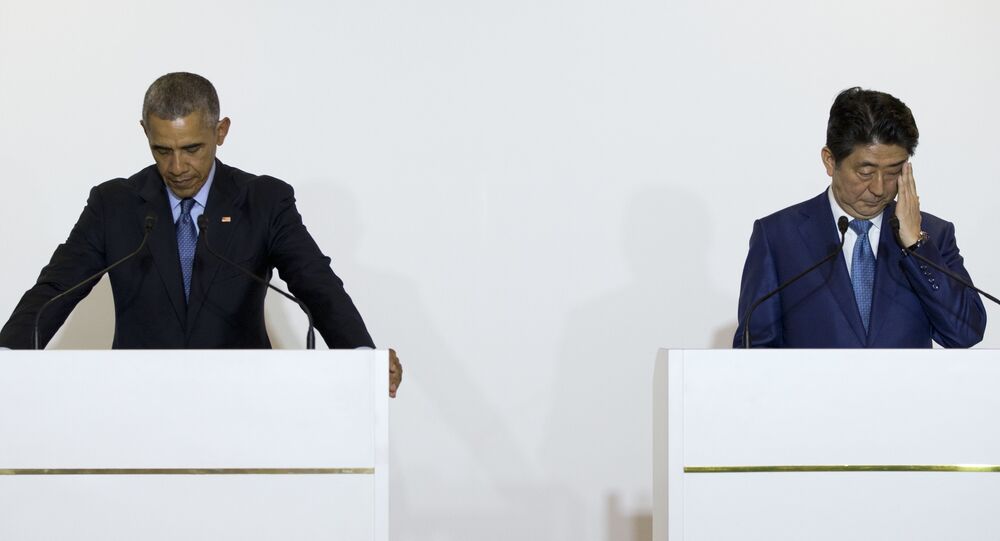 Prime Minister Shinzo Abe moves to strengthen military bonds with Washington despite a public demanding the eviction of US troops stationed in Okinawa after a number of abhorrent crimes against residents.

Anti-US protests continue in Okinawa, Japan, where recent criminal incidents involving American military personnel has stoked longstanding anger among Japanese who view the United States as an occupying force rather than an ally.

Last weekend, a US Navy Sailor stationed in Okinawa was arrested for a drunken driving accident that left two residents seriously injured and led command to ban all consumption of alcohol by its personnel in Japan, both on and off base.

The incident follows the rape and murder of a 20-year-old Okinawan woman last month, with local police confirming Thursday that the suspect is former US Marine Kenneth Shinzato. The atrocity caused widespread protest during President Obama’s recent visit to Japan.

Despite that Japanese people are clamoring for the exodus of American forces, the country’s Prime Minister agreed to an unprecedented defense cooperation pact with the United States this weekend, that will likely result in the increase of US military presence in the country and expanded weapon sales between the two allies.

It appears increasingly unlikely that Japanese Prime Minister Shinzo Abe will relent to domestic pressure, as the country is set to participate in upcoming joint naval wargames with the US and India along China’s eastern flank, in a bid to counter Beijing’s approaches on the disputed Senkaku (Diaoyu) Islands.

On Wednesday, Loud & Clear’s Brian Becker sat down with political analyst Eric Draitser to discuss whether recent protests against US military abuses in Okinawa may ultimately end the 71-year occupation of the island.

​"No, of course the US will not be forced out of Japan, because the issues of the poor murdered girl and her family and the long stream of similar instances, going back many years, remain secondary to the geopolitics," said Draitser. "The conservative government in Japan views the US as the sole guarantor of its own regional influence vis-à-vis China, so they are walking a fine line of placating the anger of the people of Okinawa and while still not upsetting Washington."

Draitser detailed that far from decoupling from the United States, the defense relationship between the countries has flourished in recent months, with the focus remaining on containing China.

"Obama is maintaining the status quo in regards to Japan and actually is ramping up US hegemony with the pivot to Asia, with all of his policies against China with Japan right in the center," said the analyst.

Could Prime Minister Shinzo Abe be ousted for ignoring the outrage?

"No," answered Draitser. "He remains in power for the same reasons as the unpopular politicians in the United States. Shinzo Abe operates in an environment with a deeply compliant corporate media and, while there is coverage of the protests in Okinawa, it is not front page news."

The analyst also pointed to previous examples, from Abe’s failed economic agenda to the Fukushima nuclear accident, where the country’s media outlets refused to challenge the government, seek the truth behind events, demand change, or give voice to opposition figures.

"Abe is also well known for the 'Abenomics' policy that has repeatedly failed and has been discredited by economic experts, but he remains politically insulated from the impact of those policies," said Draitser. "Abe has a media apparatus that does not present an opposition view to his administration, but rather works in service to his administration, even if they do not agree with him politically."

The pundit noted that the same activities continue in the United States, where large protests face a veritable media blackout, creating the appearance of calm.