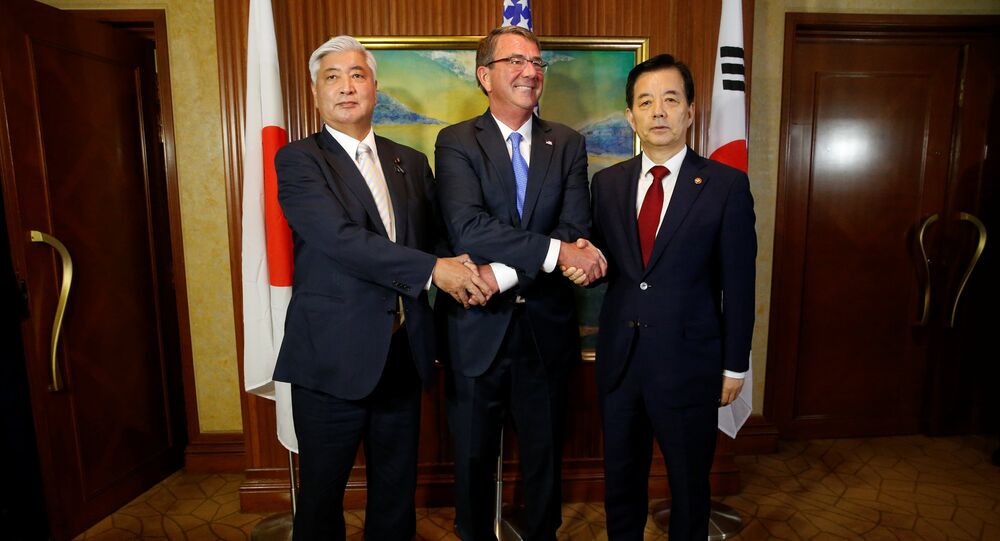 The defense ministers of Japan and South Korea have agreed to establish new connection hot-lines between their departments to coordinate actions in case of threats and emergencies, local media reported Saturday.

© AP Photo / Ahn Young-joon
Joint US-Japan-S Korea Drills Directed Against N Korean 'Provocations'
MOSCOW (Sputnik) – The bilateral agreement was reached on the sidelines of the 15th Asia Security Summit, or the Shangri-La Dialogue, which opened in Singapore earlier in the day, according to the Kyodo news agency.

The parties also discussed their positions on North Korea's nuclear and missile programs and agreed to maintain a tough stance against any further "provocations" by Pyongyang, the agency reported.

Earlier in the day, US Department of Defense announced that the scheduled joint ballistic missile defense drills between Washington, Tokyo and Seoul, which are due to be held on the sidelines of the Rim of the Pacific (RIMPAC) exercises in June and July, will be aimed at improving coordination against Pyongyang's "provocations."

Japan, US, South Korea Agree to Step Up Pressure on North Korea

US, Japan to Strengthen Defense Capabilities Against North Korea Threat