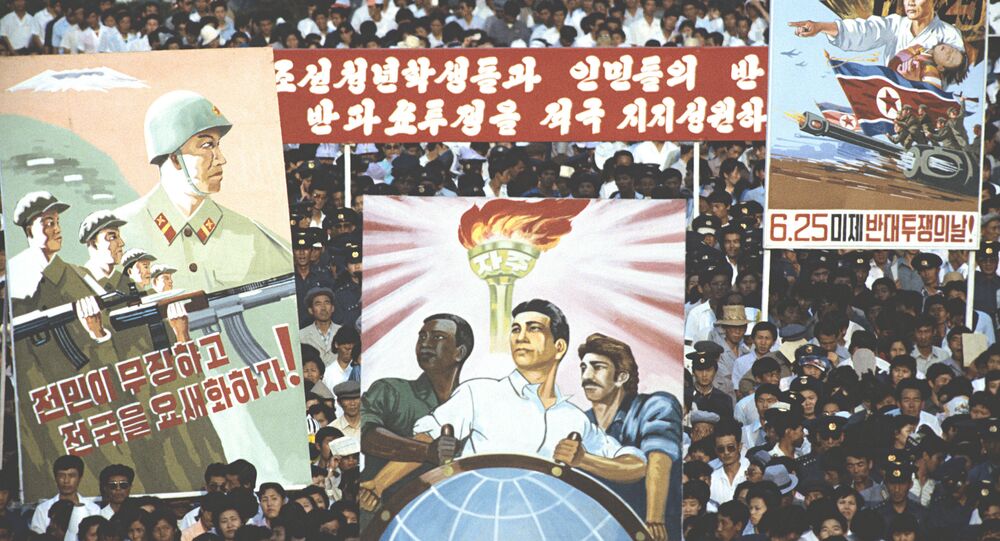 Donald Trump appears to have received the most unlikely endorsement of the campaign so far, with North Korean state media outlet DPRK Today praising the candidate as a "wise politician" and a "far-sighted presidential candidate." No kind words were to be found for Democratic frontrunner Hillary Clinton, though, with the outlet calling her 'dull'.

At the same time, DPRK Today insisted, "the president that US citizens must vote for is not that 'dull Hillary' – who claimed to adapt the Iranian model to resolve nuclear issues on the Korean Peninsula – but Trump, who spoke of holding direct conversation with North Korea."

© AFP 2020 / Andrew Caballero-Reynolds
No Go: Why Clinton’s ‘Iranian Scenario’ for North Korea Won’t Work
Furthermore, the publication noted that Trump could help unite the two Koreas, and that his 'inflammatory policies' (as far the conventional wisdom behind US foreign policy goes, presumably) have "many positive aspects."

Meanwhile, commenting on Trump's suggestions that Washington might draw down or withdraw US forces in the Korean peninsula, where they have been stationed for over 65 years, should South Korea fail to pay their fair share for the troops' presence, the editorial welcomed the policy and suggested that the US should do so as soon as possible.

© AP Photo / Lim Tae-hoon/Newsis
Pyongyang Threatens to Fire at S Korean Warships if They Cross Sea Border
Speaking to CNN on the meaning of the editorial, geopolitical analyst Bruce Kligner, a former CIA officer and expert for the neoconservative think tank Heritage Foundation, warned that Pyongyang "has a long standing objective to divide the US from its allies, to remove US forces or at least reduce them on the peninsula…If they see a future policy-maker as advocating the removal of US forces, that fulfills their objectives, so they would be in favor of anyone who's willing to do that."

For his part, Aidan Foster-Carter, a professor of Korean studies at the University of Leeds, told NKNews that while the op-ed was not the official face of the North Korean government speaking, "it is certainly Pyongyang flying a kite, or testing the waters."

"For the rest of us," the professor bizarrely suggested, "this is a timely reminder – if it were needed, of just how completely Trump plans to tear up established US policy in the region; and what an irresponsible, unthinking menace the man is."

Japan, US, South Korea Agree to Step Up Pressure on North Korea