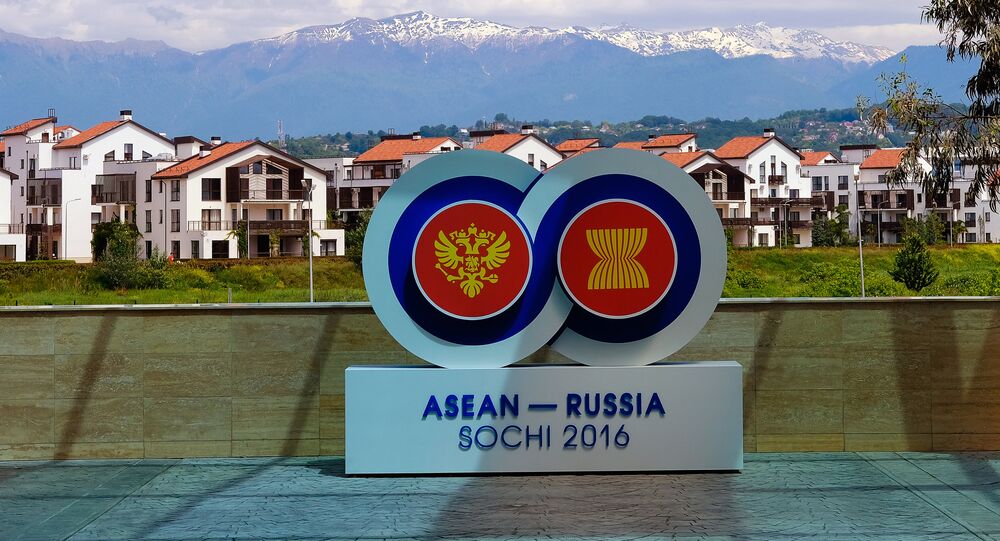 The Russian resort city of Sochi hosted the Russia-ASEAN summit on May 19-20, marking the 20th anniversary of partnership between Moscow and the Asian bloc and holding good promise of closer partnership ties between the participating states.

"I hope that our strategic partnership will reach a qualitatively new level,” President Vladimir Putin said during the meeting that  focused on the war on terrorism, regional security, economic partnership and defense, China’s official newspaper The People’s Daily wrote.

The newspaper quotes Moscow-based economist Natalya Rogoshina as saying that while the ASEAN countries once eagerly US assistance on security issues most of them were now turning to Russia for help.

© Sputnik / Evgeny Biyatov
Russia’s Pivot to Asia ‘Gaining Pace’ – Kawasaki Heavy Industries
Russia, for its part, has been playing an increasingly active role in Asia-Pacific affairs. During informal talks with Japan on May 9 President Putin and Japan’s Prime Minister Shinzo Abe discussed the four Kuril islands and other territorial issues. On April 18 the foreign ministers of Russia and India discussed a raft of regional problems during a meeting in Moscow.

"Russia and South Korea have agreed to work closely together in dealing with emergency situations and are also going to step up cooperation against terrorism," The People’s Daily wrote.

Looking for a breakthrough

Faced with NATO’s continuing expansion eastwards, Russia is looking for a way out of the European dead end and new allies.

“Hit by the Western economic sanctions, falling oil prices and a stuttering economic situation at home, Russia needs a strategic breakthrough,” Professor Gao Fei from the Diplomatic Academy in Beijing, told the newspaper.

“In the wake of crisis in Ukraine, Russia is looking for closer cooperation with the Asia-Pacific countries which are becoming a new political and economic center,” Professor Gao noted, adding that Moscow’s friendly relations with the Asia-Pacific nations  would eventually serve as a means of containing the US.

“The well-balanced foreign policy pursued by the Asia-Pacific countries  and their refusal to join the Western sanctions against Russia offers Moscow a way out of the current situation,” Gao Fei emphasized.

According to Su Xiaohuei deputy head of the Institute of International Strategy, a Beijing-based think tank, Russia’s current pivot to Asia could prove fairly long-lived.

“Russia had long been focusing its attention on the West, which means that  relations with Western countries  suit Russia’s interests better and I don’t think that within the next five years Russia will find it easy shifting its attention eastwards,” Dr. Su said.

Moreover, Russia’s road east could prove a bumpy one as it will have to compete with the US for influence in key parts of Asia and the Pacific, especially where it comes to arms exports, The People’s Daily wrote, citing Japan’s Kyodo News agency.

Here to Stay? German Firms Fear Russia's Pivot to Asia May Be Permanent