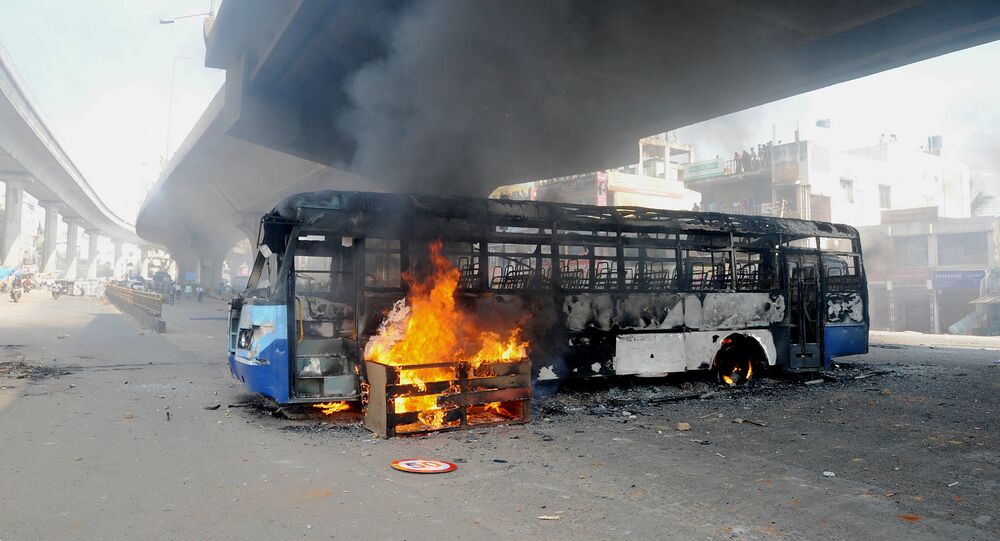 The remains of several public buses, which were destroyed during various protests, were put on display in the southern Indian city of Bengaluru as part of a local government awareness campaign.

NEW DELHI (Sputnik) — The so-called dead buses were parked throughout Bengaluru (formerly Bangalore) by the Karnataka State Road Transport Corporation (KSRTC). The dead bus rally was initiated by the government authorities to make people aware what kind of damage they cause to public properties during protests.

@TOIBengaluru KSRTC is launching `Its my bus' campaign on Tuesday, with garment factory workers participating in the awareness campaign

​The 'It's My Bus' campaign was the brainchild of the KSRTC's Managing Director Rajendra Kumar Kataria, who arranged for burnt vehicles to be displayed at major bus stations in the city.

© AFP 2020 / Chandan Khanna
Taming Delhi's Traffic: Banking on the Odds to Tackle India's Pollution
During the campaign, the buses will carry messages like "what is my fault" and "why did you burn me" as though the vehicles themselves are blaming the public.

"The constitution that gives us the right to agitate also specifies our duty. This bus is bought with public money. It is your bus, so we wanted people to remember this," said Kataria. The dead vehicles will be towed via the city's arterial roads to send a message to the common people.

The motivation for the campaign came from garment workers' protests in the city; the demonstrators had rallied against the government's pension plans. Up to 150 state-operated buses were damaged during their demonstrations and eight were burned. The recent protests cost the public budget about 150 million Indian rupees ($2.25 million) in total. Several artists and other public figures are also lending their hand in support of the campaign.

Russia, India to Hold Joint Military Drills in Second Half of 2016