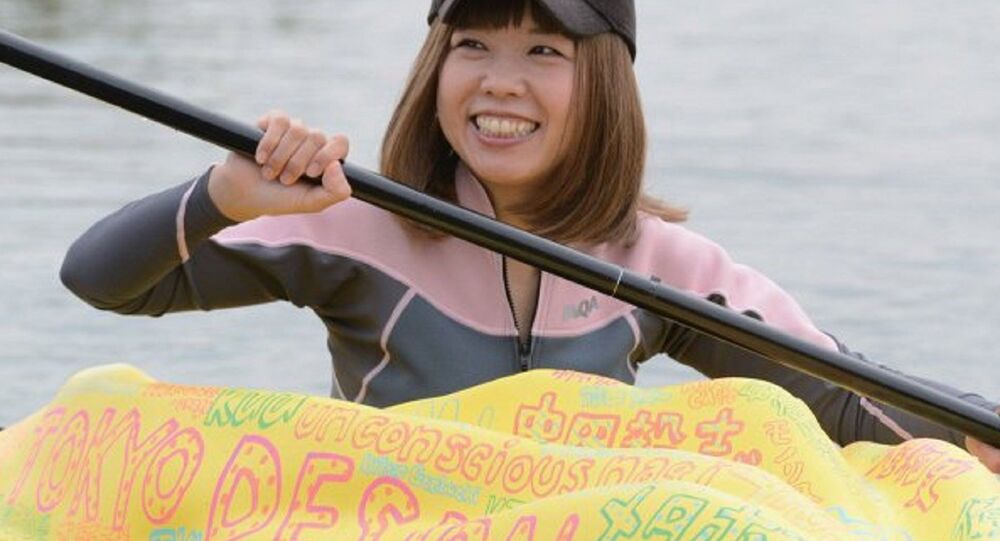 A Japanese artist has been found guilty of obscenity after distributing data to 3D print her vagina, to raise money to manufacture a kayak, also modeled after her genitalia.

© AFP 2021 / ADRIAN SANCHEZ-GONZALEZ
Russian Artist Paints Portrait of DiCaprio Using Her Breasts for Brush
Megumi Igarashi, 44, also known as “Rokudenashiko,” meaning “good-for-nothing girl,” was convicted on Monday over her July 2014 arrest for distributing “obscene” images. She was fined 400,000 yen (about $3,687).

Igarashi was previously cleared on one charge related to reproductions of her vagina, after selling plaster versions of the kayak at a sex shop in Tokyo. Her lawyers argued that the kayak did not obviously resemble female genitalia and could not be considered obscene.

Months later, she was arrested again, for creating and displaying plaster molds of her decorated vagina, and sending and selling discs containing the code to 3D print it.

The judge determined that the data which she distributed could “sexually arouse viewers” even though it was “flat and inorganic,” Kyodo News reported.

© Sputnik / Dmitry Korobeinikov
Christie’s Sells Serov’s Painting for Record $14.5Mln
“I am innocent because neither the data for female genitals nor my artworks shaped like female genitals are obscene,” Igarashi told the court.The artist claims she was inspired because, due to obscenity laws in Japan, she did not know what female genitalia was “supposed to look like.”

“I thought it was just funny to decorate my [molded] pussy and make it a diorama, but I was very surprised to see how people get upset to see my works or even to hear me say manko,” she added. Manko is a Japanese form of slang for vagina.

Lawmakers in Japan have refused to outlaw pornographic images of children in manga and other graphic representations, citing “freedom of artistic expression,” though the depiction of genitalia is forbidden under obscenity laws.

Igarashi could have been sentenced to up to two years in prison for the offense.

Alien Invasion: An Artist's Surreal Take on the Devastation of Damascus