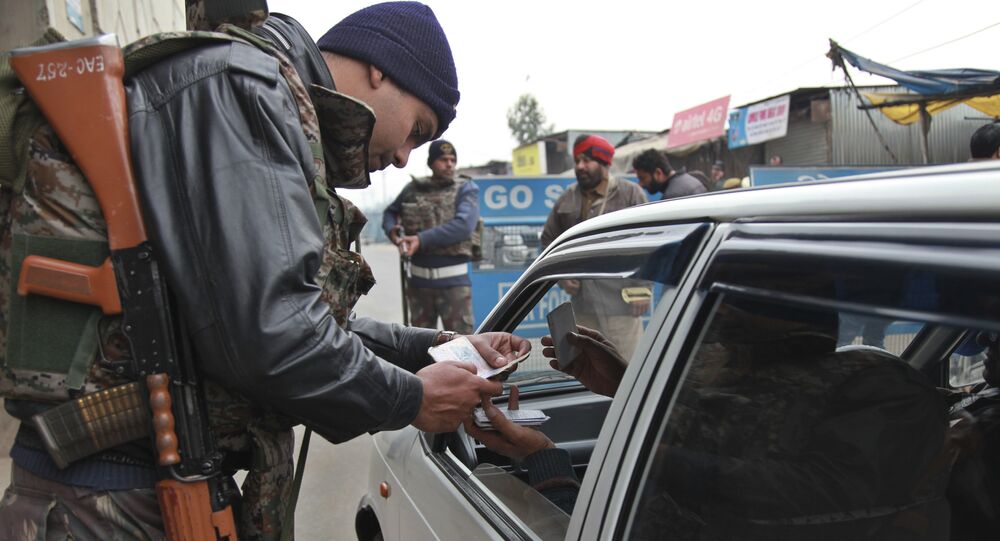 Another Pathankot-style terror attack has been averted in Delhi when police arrested 12 suspected terrorists belonging to Jaish-e-Mohammed. This time their target was Hindon Air Base, situated close to Delhi.

© AFP 2020 / STR
Indian Police Arrest 3 Daesh-Inspired Extremists in Jihadist Cell Raid
Bolstered by the terror attack at the Pathankot Air Base in Punjab, Jaish-e-Mohammed had again planned a major terror attack and unleashed dozens of their trained men in Delhi and its adjoining areas.

This time the target was Hindon Air Force Base in Ghaziabad in Uttar Pradesh, which is just 30 km from the Indian capital. But due to the alertness of the Indian Intelligence Agencies the terrorists' plan was foiled.

During the interrogation it was revealed by the alleged leader of the suspected JeM terror module, Sajid Ahmed was training as dancer to participate in the reality TV show. Police are tracking the call records of all the suspects. In addition, a special team of Delhi police officers have enlisted the services of cyber experts as all the suspected terrorists were communicating with their handlers in Pakistan, sources in the Delhi Police told Sputnik. Police are also trying to find out their other activities.

Sajid and his accomplices were planning a Pathankot- style terror attack at the Hindon Air Force Base but according to police they were in the initial stages of planning.

© AP Photo / Noel Celis, Pool
India's Former Air Chief May be Found Guilty of Corruption
Defence expert, Qamar Aga told Sputnik in an exclusive interview that, "They have contacted the JeM leader in Pakistan through Whatsapp and the JeM leader guided these people and it took time for the Indian police to untangle the web. Luckily, Indian intelligence agencies are capable of foiling such types of terror plots. Nevertheless this problem still remains, so Indian government and civil societies and religious leaders have to play a major role in curbing this tendency."

The recent tendency among the youth as they are being lured by Daesh or other terror organizations is really a cause for concern for the Indian government. And despite the Indian home minister having said in the Parliament that Daesh has no footing in India, the reality on the ground is quite different.

"The recent tendency among youth is really a disturbing trend as they are associating them with Daesh or other terror organizations. This tendency should be checked," Qamar Aga told Sputnik.