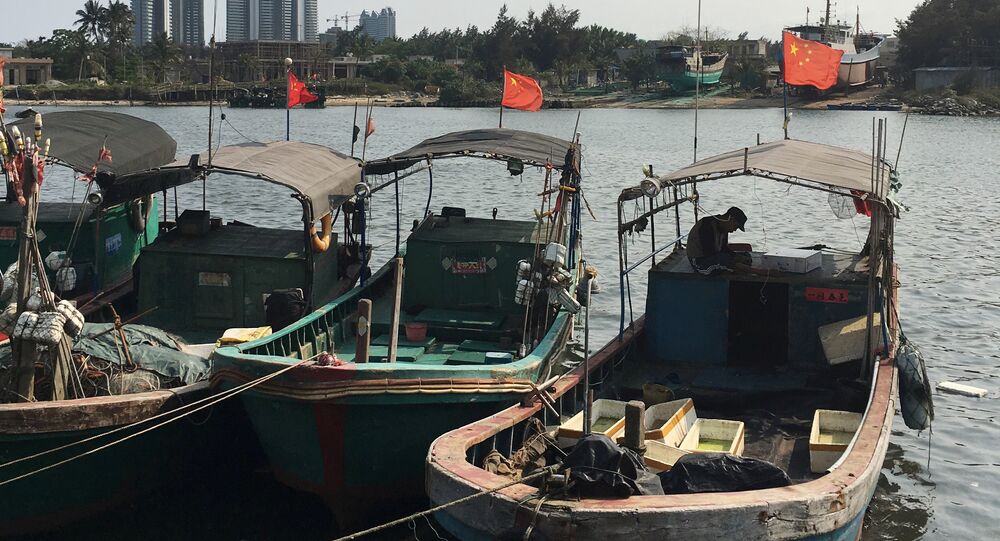 China continues to train ordinary fishermen in the tiny port town of Baimajing to police the disputed waters of the South China Sea, Reuters reported.

© AP Photo / Lolita C. Baldor
What is Really Going on Behind the Curtains in South China Sea?
The training of China's "increasingly sophisticated fishing militia" for sailing the waters of the South China Sea is in full swing in the tiny port town of Baimajing on Hainan Island, according to Reuters.

"The maritime militia is expanding because of the country's need for it, and because of the desire of the fishermen to engage in national service, protecting our country's interests," Reuters quoted an unnamed adviser to the Hainan government as saying.

The adviser added that fishermen get basic military training from the city-level branches of the People's Armed Forces Department and that the training encompasses search and rescue operations, which he said help contain disasters at sea and safeguard Chinese sovereignty.

With "a particular mission in safeguarding sovereignty" due to come up, the government will coordinate with the fishing militia by notably asking them to gather information on foreign vessels' activities at sea, according to the advisor.

Chinese Foreign Ministry Spokesman Lu Kang, for his part, said that his country does not use its fishing fleet to help establish sovereignty claims in the South China Sea, adding that "this kind of situation does not exist."

According to him, Beijing had taken measures to ensure that the country's fishing fleet carries out business on a legal basis.

© AP Photo / Bullit Marquez
Obama: US Not Acting Against Beijing in South China Sea, Wants 'to Be Partners'
Beijing claims almost all of the maritime and terrestrial regions within the South China Sea. Overlapping claims are made by Vietnam, Malaysia, Brunei, the Philippines and Taiwan. The US has no territorial claims over what Reuters described as "the islets and atolls that constitute the Spratly Archipelago and its rich fishing grounds," but this hasn't stopped the US Navy from sending several military vessels there, prompting alarm from China.

China has been in the process of constructing an artificial island on the disputed reef in the South China Sea for about a year. In 2014, Beijing began building a 3,000-metre airstrip there, causing outrage from neighboring countries with overlapping territorial claims. China completed its first testing of the facility in January, with a civil aircraft landing on the reef.