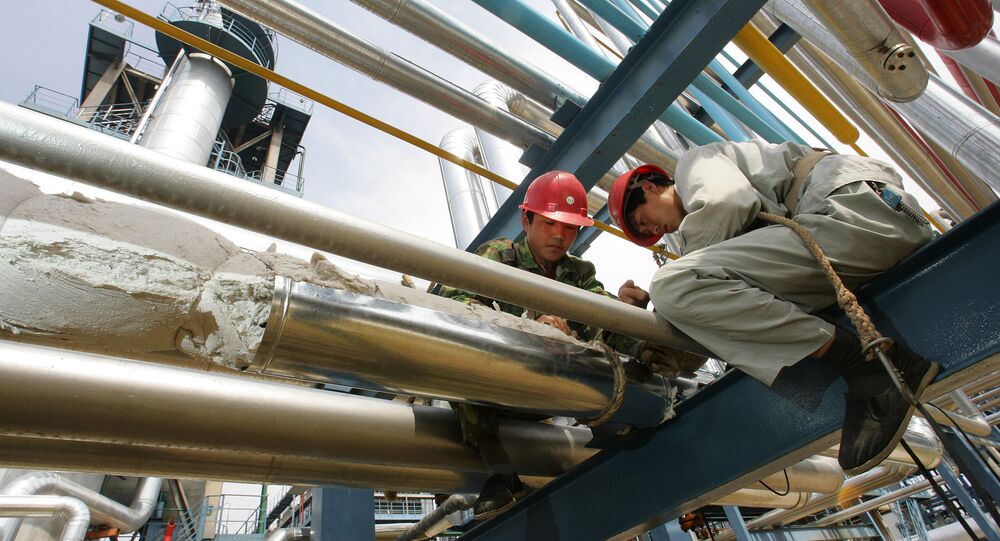 Russia’s rising rivalry as China’s top crude oil supplier in March has forced the Saudis to do something they’ve never done before – to sell a crude oil cargo to an independent Chinese refinery, its first spot sale to this type of buyer in a sign that the world's biggest oil exporter is trying to regain lost market share.

This is Aramco's first spot sale to a teapot. The company typically sells its crude through contracts of one year or longer, and under an Official Selling Price (OSP), rather than in spot trades.

However this time Aramco sold Shandong Chambroad a cargo of Arab Heavy crude at a discount to the Oman/Dubai benchmark price, the agency quotes an industry source familiar with the matter without revealing his name.

The 730,000-barrel cargo will be lifted in June from Aramco's storage in Japan's Okinawa prefecture and shipped to China's eastern province of Shandong.

Russia has been the major supplier of the surging demand from China's teapots.

© AP Photo / Hasan Jamali, File
The Calm Before the Coming Global Storm
The government allowed them to start importing crude oil in the second half of last year, part of Beijing's efforts to boost private investment and competition in oil refining which is dominated by state-run groups.

The effort pushed Russia to China's biggest oil supplier in March and in four separate months in 2015, "nudging aside the Saudis."

"Now, however, the Saudis have stepped up their game and have offered teapots spot oil contracts. That’s very unusual for Saudi Arabia, which prefers to trade its oil on the futures markets and at a fixed price--but the stakes seem to be high enough to justify this move," Irina Slav, oil and gas analyst for the US-based Divergente LLC consulting firm explains in her article for Oilprice website.

He view is echoed by a senior trader who has done deals with Saudis and Chinese importers.

"For the Saudis, offering a spot cargo to a teapot signals they want to bite back at the Russians, who have supplied most of the demand by the rising teapots," Reuters quotes him as saying.

© CC0
Saudi Arabia Launches Aramco IPO to Raise Revenue Amid Low Oil Prices
"And it tells other producers, Iran in particular, that the Saudis are willing to play hard ball in the rush for Asia's market share."

Neither Saudi Aramco nor Shandong Chambroad Petrochemicals were available for comment on the deal.

China’s teapots, which account for 20 per cent of the country’s refining capacity, are responsible for a growing slice of imports after Beijing granted them import quotas last year.

They are running at higher operating rates due to their greater processing flexibility as compared with state-owned Chinese oil giants, and are contributing to a wave of diesel exports as China’s refining capacity outpaces its fuel demand.

Their success is a surprise reversal after years of attempts by Beijing to squeeze the teapots out of the market by limiting their access to bank loans and crude supply.

The battle for this market share "could prove to be a war of patience and financial resilience," Slav forecasts.

"By all means, Saudi Arabia has the upper hand in the latter, but Russia has a history of being patient and it’s used to tightening belts when times call for it, unlike the Saudis," she notes.

Perhaps it could be a better idea for both to relax and look for other destinations for their oil, such as India. Before Iran gets there first, the analyst however advises.