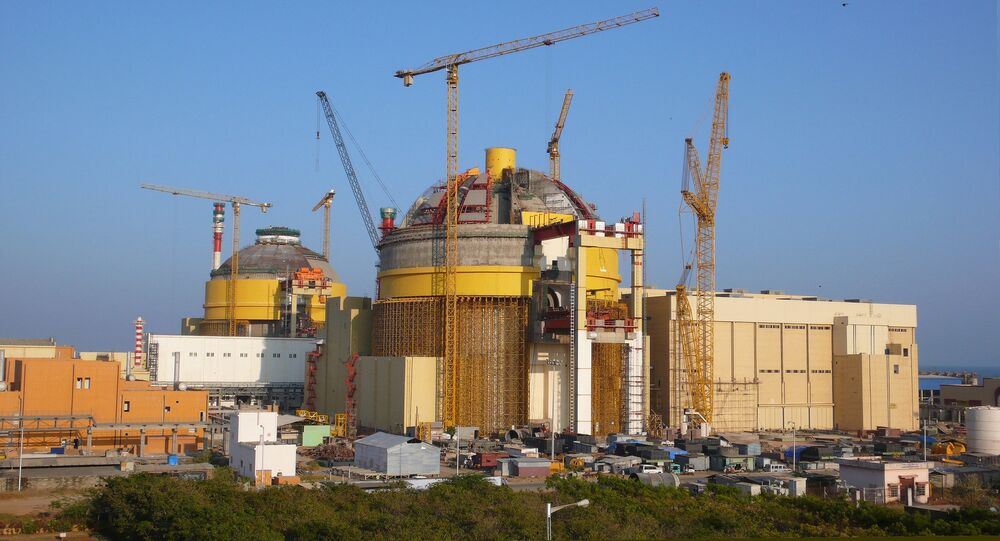 The Government of India annouced planning to expand its nuclear program by setting up at least half a dozen nuclear power plants (NPP) in the northern part of the country. India plans to triple its current capacity (5780 megawatts) of nuclear power generation by the year 2024.

Addressing the Parliament today, Minister of State Atomic Energy, Jitendra Singh said, "We have also made headway in bringing nuclear programme to North India, which was not much visible earlier. In Last one year, we have started a plant in Gorakhpur in Haryana. We are also exploring the possibility of Bhiwandi in Haryana, Patiala in Punjab, Bulandsahar in Uttar Pradesh and Dehradun in Uttarakhand. And therefore, we are on a very fast track, not only in expanding but also facilitating it."

Until recently, the majority of NPP construction had taken place in costal areas of India.

© Photo : Bharat Rakshak
Indian Navy Goes Nuclear: Country's First Nuke Sub Undergoing Sea Tests
The government has already laid plans to build the Kovvada NPP on recently acquired land in Srikakulam and they also have approved the Haripur NPP to be set up in West Bengal with the help of Russia.

Russia will be closely involved in the construction of the new NPPs, first set up with the 2014 Indo-Russia agreement to jointly build 12 NPPs in India in the next 20 years.

According to sources in the Indian Department of Atomic Energy, India is not keen on purchasing nuclear reactors from western countries due to a variety of reasons. Western nuclear reactors are twice as expensive than that of Russian ones.

The government has also taken another important decision in this regard, i.e, to allow the central government run Nuclear Power Corporation India Ltd (NPCIL) to enter into joint ventures with other public sector entities. India's Atomic Energy Act previously allowed only NPCIL to set up nuclear power plants in the country. However, this law has been amended to facilitate other public sector undertakings to set up NPPs with the technical support of NPCIL, which has been facing a financial crunch, constraining it from setting up new nuclear power plants.

Only a few days ago, India broke the world record in producing nuclear fuel. The Nuclear Fuel Complex (NFC) in Hyderabad which produces fuel required for all the operating power reactors in the country claimed that that it had produced 1503 metric tons of fuel between April 2015 and March 2016, making it the world's biggest producer of nuclear fuel.  The NFC's intention behind this large scale production was to prove that the upcoming power plants would not face a fuel shortage.

India Tests Nuclear-Capable Missile, US Looks the Other Way

India Has Chances to Become Party to Nuclear Non-Proliferation Treaty