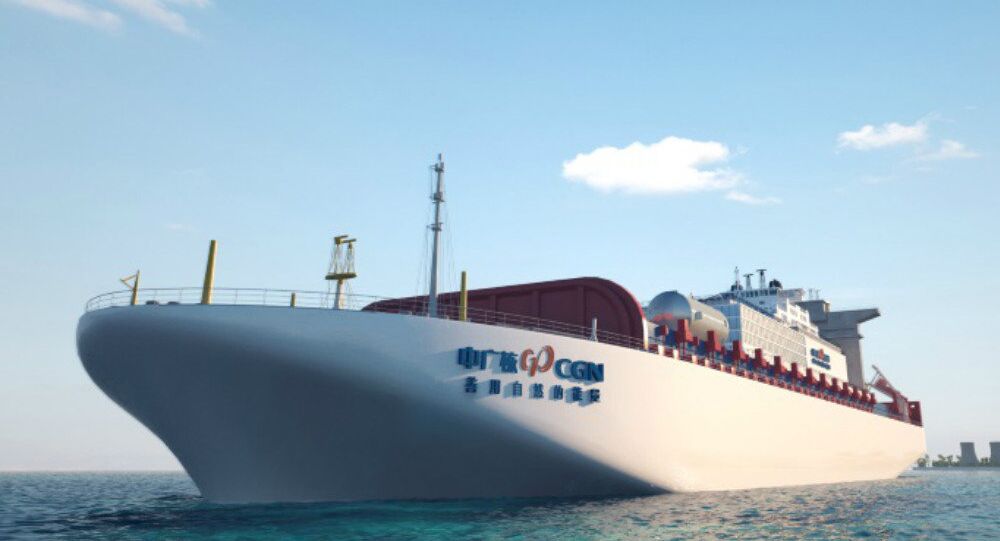 China is pushing ahead with its construction of a first-ever floating nuclear power platform, which is expected to add to Beijing's ever-increasing clout in the South China Sea, according to the Chinese newspaper Global Times.

© AFP 2020 / Peter PARKS
Total Nuclear Power Capacity in China to Double by 2020
The construction of China's first maritime nuclear power platform in the South China Sea is due to be completed by 2018 and be put into operation by 2019, the Chinese newspaper Global Times reported.

The newspaper quoted analysts as saying that such a platform could boost the efficiency of China's ongoing construction work on islands in the South China Sea considerably.

In a recent interview with the Global Times, Liu Zhengguo, head of the general office of the China Shipbuilding Industry Corporation (CSIC) which is responsible for designing and assembling the platforms, said that the CSIS is "pushing forward with the work."

"The development of nuclear power platforms is a burgeoning trend. The exact number of plants to be built [by the CSIC] depends on market demand.  Judging by various factors … the demand is pretty strong," he said without elaborating.

Earlier this month, it was reported that China plans to construct at least 20 maritime nuclear power platforms "in the future."

According to the Global Times, the platforms "will play an important role in China's long-term South China Sea strategy."

The newspaper cited Li Jie, a Beijing-based naval expert, as saying that the platforms will add to reliable power supplies for lighthouses, rescue and relief equipment as well as airports and harbors on the South China Sea islands.

"Given the long distance between the Nansha Islands and the Chinese mainland and the changing weather conditions, transporting fuel could be an issue, which is why developing the maritime nuclear power platform is of great significance," he said.

© AP Photo / Andy Wong
Cautious Optimism: China’s Economy Likely to Withstand Challenges of 2016
Sun Qin, board chairman of the China National Nuclear Corporation, said last month that the country will start the construction of a floating nuclear power station by the end of this year.

According to him, the facility, which is designed to power offshore oil and gas drilling as well as island development and remote areas, is set to be put into operation in 2019.

Right now, there are 30 nuclear power generating units in operation in China, with another 24 units under construction, all on land, media reports said.