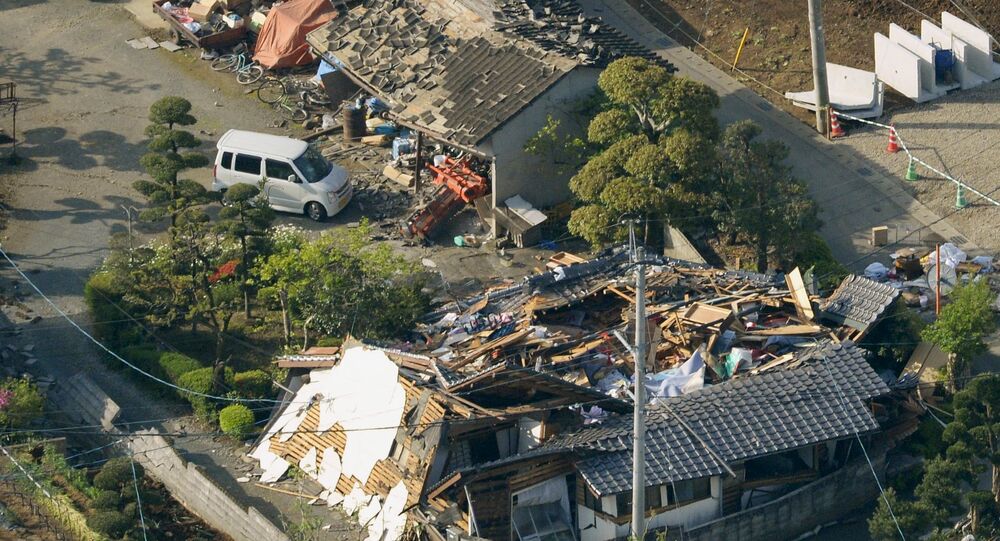 The total number of powerful and minor earthquakes on the Japanese island of Kyushu has exceeded 600 since Thursday’s devastating quake, local media reported.

TOKYO (Sputnik) – On April 14, a magnitude 6.5 earthquake struck to the east of Kumamoto city (the capital of Kumamoto Prefecture) on Japan’s Kyushu Island, killing local residents and damaging infrastructure. It was followed by multiple aftershocks. The following day, the same area was hit by a 7.0-magnitude earthquake.

Most of the tremors were felt strongly in the Kumamoto and Oita prefectures, the national NHK broadcaster said.

PressTV
Japanese Earthquake Aftermath as Seen From Above
The death toll in the natural disaster has risen to 44 and over 1,000 people sustained injuries in Kumamoto alone, the news outlet stated.

About 125,000 people in Kumamoto and more than 3,500 in Oita have been provided with shelter at city offices, schools and parking lots, it added.

Japan is a seismically active region. In March 2011, a 9.0-magnitude offshore earthquake triggered a 46-foot tsunami that hit Japan's Fukushima nuclear power, leading to the leakage of radioactive materials and the shutdown of the plant. The accident is considered to be the world's worst nuclear disaster since Chernobyl.

Nearly 70,000 Evacuated in Japan After Series of Deadly Earthquakes