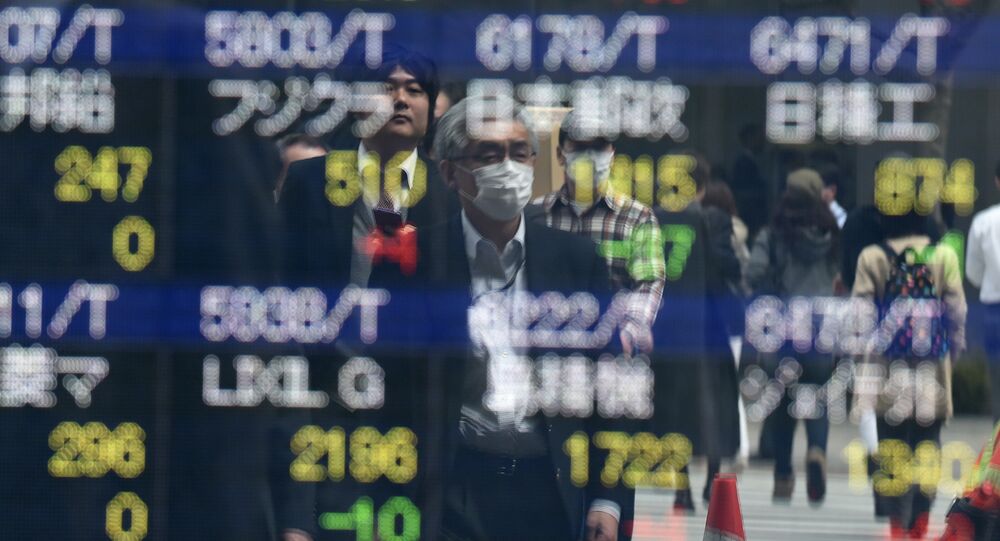 The Japanese GDP likely added 0.5% in Q1 2016, ending the technical recession of the second half of last year; yet, gains in the corporate sector are mediocre, and Japan’s financials were battered by the negative market dynamics and a subsequent capital wipeout, meaning Shinzo Abe cabinet will have to expand economic stimulus programs soon.

© Sputnik / Grigoriy Sisoev
Japan Hopes to Address WWII Peace Treaty With Russia at Ministerial Talks
Kristian Rouz – With the yen appreciating steadily throughout the first three months of this year, the Japanese economy has likely avoided yet another recession in Q1 2016 even though the negative effects of cheap oil and weak international demand for manufactured goods have been a major challenge. The Abe cabinet’s policies coupled with Bank of Japan’s (BOJ) ultra-accommodative measures have provided the Japanese economy a boost solid enough to push the nation out of despair into a very moderate, yet positive, growth territory. The next steps are to follow shortly: by July, the regulator is preparing to introduce another round of monetary easing policies, hoping to accelerate inflation, domestic demand, and overall economic activity in Japan.

The BOJ introduced negative interest rates at —0.10%, in January, and ever since the Japanese domestic borrowing posted moderate gains, allowing for a brighter economic outlook. The yen has appreciated by roughly 10% against the dollar ever since, impairing the competitiveness of the Japanese exports, yet, the domestic demand in the first three months turned out to be robust enough to pull the economy out of the period of contraction in 2014-2015.

The BOJ might further loosen monetary conditions as soon as during its April 27-28 policy meeting, providing even more money liquidity and, eventually, cheap credit to domestic borrowers. If not, the new ultra-aggressive stimulus would be implemented no later than in July, observers say, as the economic recovery is weak. Official Q1 GDP data are due shortly, likely indicating the recession is over.

Meanwhile, Kozo Yamamoto, one of PM Shinzo Abe’s advisors, urged for an extended fiscal stimulus, suggesting the implementation of a corporate tax reform, ensuring more transparency in the zaibatsu bookkeeping. A delay in implementation of sales tax and other fiscal measures could cost the Japanese budget some 10 trln yen ($92 bln), Yamamoto said on Wednesday. Yet, such measures, coupled with a new round of monetary easing, would propel the overall economic expansion to more acceptable levels, ensuring the stagnation that had plagued Japan’s economy in the 1990s and 2000s, would not return once again.

"In a situation where corporate sentiment has peaked out and the expected inflation rate is also on the decline, recent progress in the yen's appreciation will make it difficult for Japan to beat deflation," Atsushi Takeda of Itochu Economic Research Institute said. "Further (BOJ) easing will be unavoidable to stop the trend of returning to deflation."

Even though the negative interest rates have had a limited positive effect to the real economy, many issues remain unresolved. Japan’s stock markets are tumbling amidst weaker export revenues of the zaibatsu, resulting in a lower level of corporate investment at home and abroad, as well as lower return per investment expectations. The broader Topix Index of Japanese shares dropped 14% in 2016 thus far.

Inflation excluding energy is expected to reach only 1.2% in 2016, which is still below the BOJ target of 2%, necessary to ensure sustainable economic growth. BOJ’s main inflation measure that includes energy is effectively at zero – low oil prices are immediately affecting Japan’s growth prospects.

Foreign investors are dumping Japanese assets amidst the Topix plunge and the yen’s appreciation, with some $46 bln worth of Japanese stock being sold off in 2016.
The Japanese economy is projected to grow 0.5% in Q1 year-on-year, way below Abe’s target of 2%, yet much better than a contraction by 1.1% in Q4 2015. With a robust consolidation in the labor market – Japan has added 1.5 mln new jobs since Abe took office in 2013 – a consumer-driven acceleration in the Japanese economy is very likely in the near-term, yet, a new package of stimulus measures is an essential necessity, unless oil prices recover significantly enough to provide major gains in Japan’s inflation.