The United States is planning to show its might in disputed areas of the South China Sea in what China is calling a violation of its sovereignty.

US Naval forces are, for a third time, entering a disputed region in the South China Sea using a carrier group to test the waters while claiming they are merely exercising “freedom of navigation,” according to China Cheat Sheets. However, China has rebuked the effort as a violation of their state sovereignty and a direct challenge to their national interests.

​According to maritime law, a given state rules the ocean up to 12 nautical miles away from their shore creating an extended border from the shore. Such a rule also applies to islands including those claimed by China in the South China Sea which are also claimed by other countries. 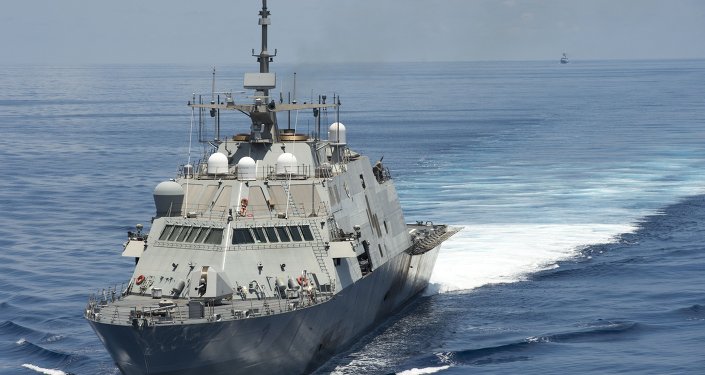 © Flickr / U.S. Pacific Fleet
Growing Provocation: US to Hold New Military Drills Near South China Sea
The carrier group that the US is sending into the region will travel within that boundary meaning, from China’s view, into area to which they have territorial rights. The US has no claim to any of the islands but some US allies in the region do, though many believe that the US role is merely to challenge China in their own region. Additionally, more than $5 trillion worth of shipping related to international trade passes through the region each year.

News of American plans to infiltrate the South China Seas were revealed only shortly after US President Obama met with Chinese President Xi Jinping at last week’s nuclear security summit in Washington. The US has argued that they have every right to engage in such “freedom of navigation” activities but Chinese President Xi Jinping responded telling Xinhua that they would not tolerate violations of their sovereignty under such a pretext.

“China respects and protects the freedom of air and maritime navigation of all countries, based on international law. At the same time, Beijing will not accept any action that damages China’s state sovereignty and national interests under the pretext of freedom of navigation,” Xi said.