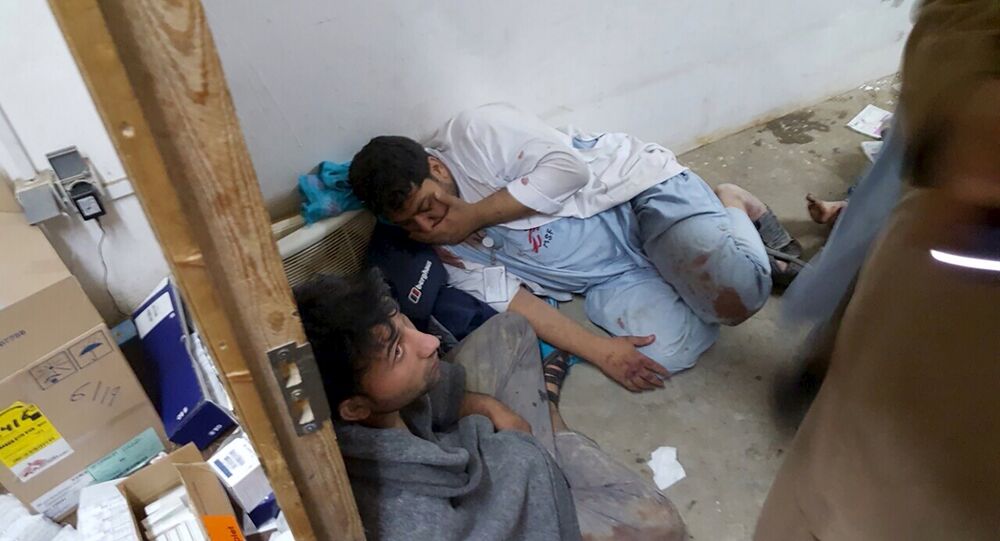 It was clear from the beginning that US military personnel responsible for the bombing of a MSF hospital in Afghanistan wouldn’t receive fair punishment for their actions, Kabir Ranjbar, President of the Association of Democratic Lawyers of Afghanistan, told Sputnik.

© Photo : media.msf.org/Victor J. Blue
US Military Personnel Get Administrative Punishment Over Kunduz Bombing
Last October, a US Lockheed AC-130 gunship aircraft fired 30mm cannon shells for over 30 minutes into a MSF (Doctors Without Borders) hospital in the Afghan city of Kunduz, killing over 40 medical staff and patients, among whom were children.

Ranjbar, a renowned human rights activist, and MSF think the bombing of the hospital in Kunduz was a crime against humanity.

"By all indications it was a war crime… The people of Afghanistan are still in shock and don't understand why airstrikes were carried out against an unprotected social object. NATO commanders knew the hospital there where, by the way, doctors were assisting wounded during military action," Ranjbar told Sputnik.

Despite the bombing of the hospital in Kunduz being a war crime, the Afghan lawyer never expected a fair investigation of the incident.

"In the immediate aftermath of the tragedy I said it would be difficult to expect a fair punishment for perpetrators. And I meant a fair investigation both in Afghanistan and beyond," Ranjbar said.

According to the human rights activist, the Afghan government has its hands tied when it comes to making independent judicial decisions. The US Army, which conducts military operations in the country, is above the Afghan national law.

"They follow their own rules, not ours. And most of their trials end with acquittal verdicts, while the rest of investigations happen with blatant violations of Afghan law on their home soil [in the United States]," Ranjbar explained to Sputnik.

© Photo : media.msf.org/Victor J. Blue
Death Toll From US Kunduz Hospital Bombing Rises to 42
As a result of unfair investigations of war crimes, the interests of Afghan people are violated, the human rights activist said.

Unsurprisingly, the same thing happened this time around — the perpetrators responsible for the killing of innocent people in Kunduz received no real punishment.

On Wednesday, it was reported that twelve US military personnel received "administrative punishments," but won't face any criminal charges for the hospital bombing in Kunduz. According to a US official who spoke with AP on the condition of anonymity, the disciplinary process was "nearly complete." Among those US soldiers who received this mild tongue-lashing none of them were generals.