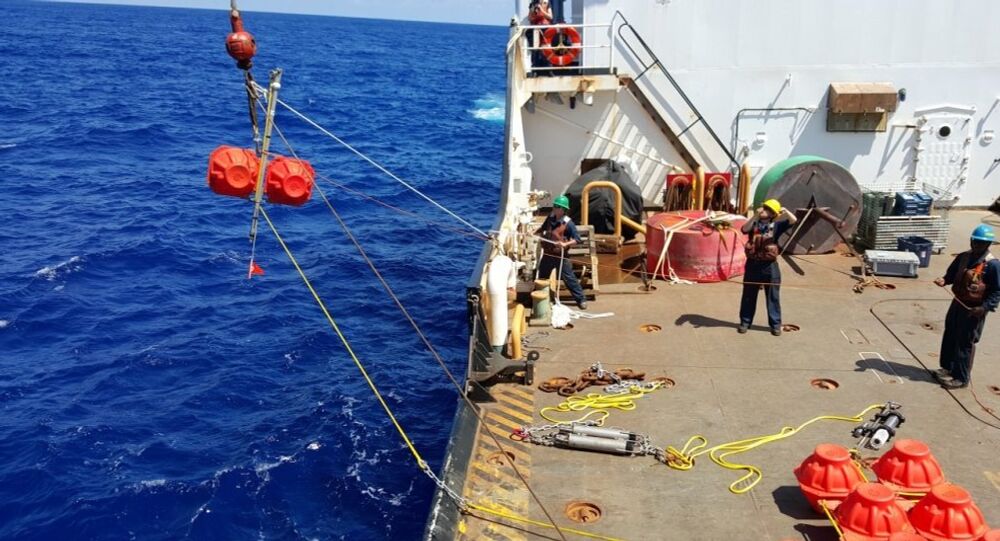 Not So Pacific After All: Scientists Record Uproar in the Ocean's Depths

Researchers were surprised by what they heard after they lowered a hydrophone into the deepest part of the Pacific Ocean, and recorded the sounds there for three weeks.

© Sputnik / Vitaliy Ankov
Russia's Pacific Fleet Counter-Terror Boats Ready for Sea After Tests
Scientists who lowered a hydrophone into the Mariana Trench in the Western Pacific, the deepest oceanic trench in the world, have reported that the ocean is a surprisingly noisy place, with almost constant noise from natural and man-made phenomena.

"You would think that the deepest part of the ocean would be one of the quietest places on Earth," chief project scientist Robert Dziak said.

"Yet there is almost constant noise. The ambient sound field is dominated by the sound of earthquakes, both near and far, as well as distinct moans of baleen whales, and the clamor of a category 4 typhoon that just happened to pass overhead."

The project is run by the NOAA Office of Exploration and Research, and aims to find out whether noise levels are growing in the ocean because of human activity, and how this might affect marine animals that use sound to communicate, navigate and feed, such as whales, dolphins and fish.

© NASA . JHUAPL/SwRI
Outer Space Mysteries: Ancient Ocean May Be Hidden on Pluto’s Moon
In July 2015 the research team slowly lowered a titanium-encased hydrophone into the deepest part of the trench, which has a maximum depth of 11,000 meters at its southern end, called the Challenger Deep.

After 23 days of recording the hydrophone's flash drive was filled, but the team was not able to return to Challenger Deep and retrieve the equipment until November because of shipping schedules and bad weather conditions.

"We had to drop the hydrophone mooring down through the water column at no more than five meters per second to be sure the hydrophone, which is made of ceramic, would survive the rapid pressure change," explained Haru Matsumoto, an engineer who worked on the project.

© Photo : noaa.gov
The hydrophone lowered into the Mariana Trench

"Sound doesn’t get as weak as you think it does even that far from the source," he said.

Dziak said that in addition to noise from ships, the hydrophone also picked up the sound of a nearby earthquake and typhoon.

"We recorded a loud magnitude 5.0 earthquake that took place at a depth of about 10 kilometres (or more than six miles) in the nearby ocean crust. Since our hydrophone was at 11 kilometres, it actually was below the earthquake, which is really an unusual experience. The sound of the typhoon was also dramatic, although the cacophony from big storms tends to be spread out and elevates the overall noise for a period of days."

Sound from a baleen whale.

Call of a toothed whale or dolphin.​

"There was also a lot of noise from ship traffic, identifiable by the clear sound pattern the ship propellers make when they pass by," added Dziak.

"Guam is very close to Challenger Deep and is a regional hub for container shipping with China and The Philippines."