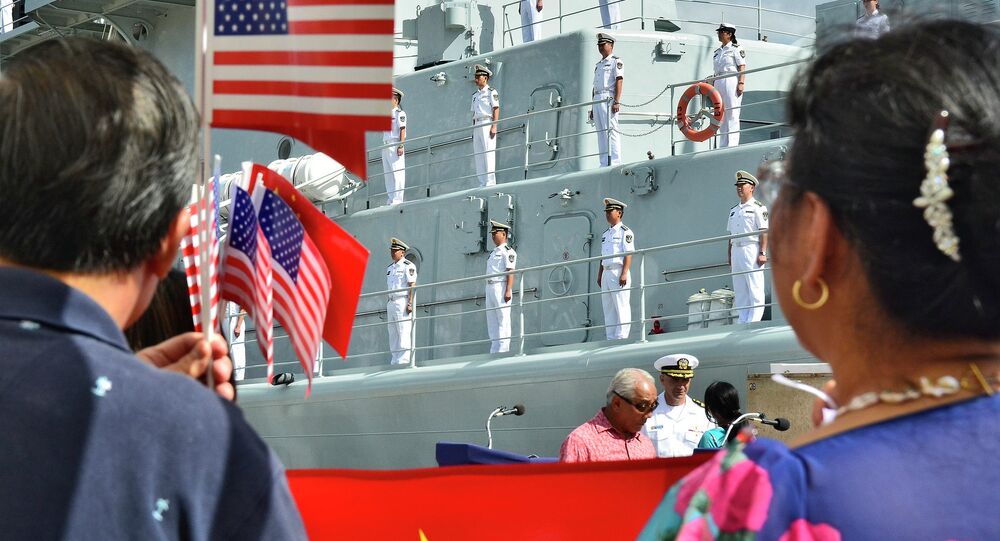 US State Secretary John Kerry has wrapped up an Asian tour with a visit to Beijing on Wednesday. Speaking to Radio Sputnik’s Loud & Clear, Eric Draitser, author, activist and founder of StopImperialism.org, draws upon the China-US rivalry in the Asia-Pacific region and its global repercussions.

“The United States and China are two of the central players in this ongoing North Korea issue. From the US perspective, they would like to be able to lean on China in order to isolate further North Korea and its government … China has maintained a somewhat neutral position, on the one hand being a guarantor of agreements between the West and North Korea, on the other hand taking a somewhat defensive position when it comes to North Korea.”

© REUTERS / Brendan Smialowski/Pool
China, US to Create UN Resolution to Targeting N Korea's Nuclear Program
China sits on the middle of the North Korea issue, the expert suggests, adding that Beijing can mediate for access to the world market for the Democratic People’s Republic of Korea, potentially leading it out of isolation, Draitser detailed.

“From the North Korean perspective, there are a number of things that need to be improved in the country in terms of the investment climate, in terms of allowing the country to continue on an independent development course while at the same time not being a hermetic kingdom that it has become. In many ways, North Korea would benefit tremendously from China as interlocutor here.”

If the US persists in conducting large-scale military maneuvers near the DPRK, the country is unlikely to listen to American entreaties, Draitser believes.

“What the nuclear deterrence allows North Korea to do is to enter into any negotiation from a position of, if not strength, at least equal footing. They are not forced to make concessions solely to please the United States or any other party. If North Korea were to be without that nuclear deterrent, then they would be subject to the kinds of coercion the US uses traditionally.”

America is not interested in peace in the Korean peninsula, Draitser suggests. Otherwise, he asserts, the US would have stopped South Korea from its overt military buildup, he said, offering that, in this case, China plays a stabilizing role in the region.

“China sees itself as defending the non-Western interests in the region, namely its own,” suggests the author, adding that the DPRK is not the most important topic on the agenda.

© AFP 2020 / WANG ZHAO
New Kid on the Block: China Becomes Diplomatically Active in Middle East
“It’s more about the ongoing conflict between the US and China all through the Asia-Pacific region. North Korea is in many ways one of the least interesting angles to this,” he said.

Ongoing South China Sea confrontations, a dispute between China and Japan over the Senkaku and Diaoyu islands, as well as a number of other issues put the US and the People’s Republic of China in a “regional competition for influence, if not proxy conflict,” Draitser claims.

“There are a number of disputed territories throughout the South China Sea that have been disputed for many years, some of these disputes going back to the end of WW2. China has grown in its maritime influence both in terms of its commercial shipping interests and increasingly militarily… It has … established what other global powers have, namely a sphere of interests that’s free of meddling in or hegemony of another global power.”

The power of economy

The short-term approach of the US is aimed at decreasing the growth of China as regional power, Draitser said.

“US is perfectly willing to accept China as an economic power so long as it doesn’t flex any muscles in and round of military and/or political hegemony.”

The “trade agreement … would freeze out China, the dominant economic player in Asia … and allow for an increased trade between Southeast Asian, South-American countries and the United States. In other words, it would maintain the US hegemony in the South-East Asia under the auspices of corporate hegemony.”

China has struck back at the TPP and the IMF, with initiatives that would enable investment growth in infrastructure and economic development throughout Asia, using the Asian Infrastructure Investment Bank and BRICS institutions.

“China is now presenting itself as an alternative, including its growing relations with Russia. This fundamentally changes the balance of power in the world, as Global South countries look East for their development and their investment. That’s what scares the United States more than anything else,” Draitser said.