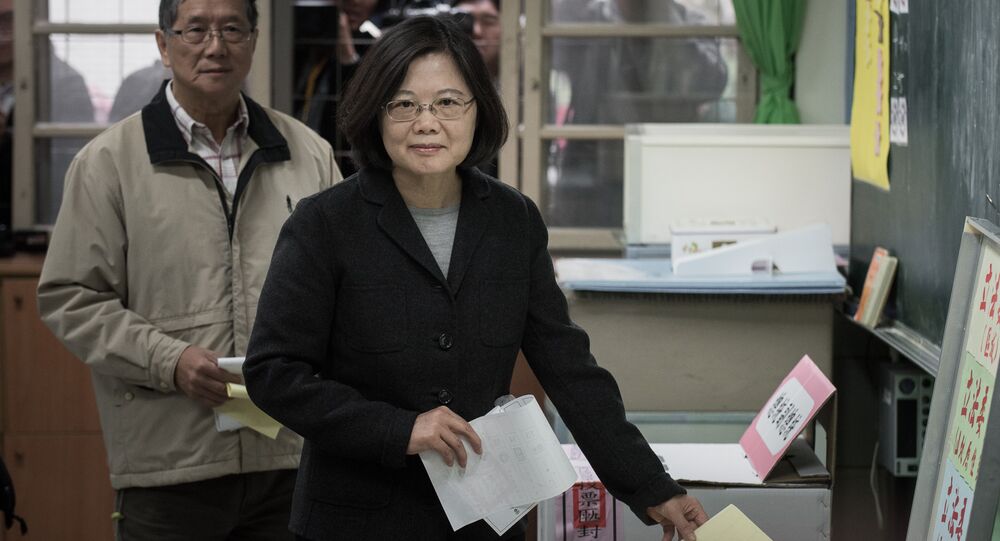 Hours after Taiwan put an independence-minded president and party into power, China responded by suggesting there could be repercussions if the island pushes further away from the mainland.

© REUTERS / Olivia Harris
US Congratulates Taiwan Opposition Candidate With Presidential Election Win
The Democratic Progressive Party (DPP) won a decisive victory in Taiwan taking the presidency as well as a majority of the legislature. Tsai Ing-wen, who assumed the presidency is the first woman to hold that position.

For the last eight years, the island has been under the administration of Ma Ying-jeou who was responsible for increasing Taiwan’s political and economic ties to the mainland. However, Tsai and the DPP support a Taiwan more independent from China, which has not gone unnoticed by Beijing.

According to China Cheat Sheets, “the change in leadership promises to usher in another era of instability across the Strait of Taiwan that separates the two regions.”

China reacted strongly to the news that Tsai won saying that the island calling the idea of independence for the island “poison.”

As China Cheat Sheets reports, “while Tsai has pledged to maintain peace with China saying that she supports a ‘status quo,’ China's Taiwan Affairs Office warned about any potential moves toward independence and vowed to defend the country's unity.”

© AP Photo / Jason DeCrow
Chinese Foreign Minister Demands US Stop Arms Supplies to Taiwan
"If there is no peace and stability in the Taiwan Strait, Taiwan's new authority will find the sufferings of the people it wishes to resolve on the economy, livelihood and its youth will be as useless as looking for fish in a tree," Beijing said through state media.

"We hope Tsai can lead the DPP out of the hallucinations of Taiwan independence, and contribute to the peaceful and common development between Taiwan and the mainland," it added.

Tsai is now tasked with adhering to the wishes of her separatist constituency trying to keep the peace — as well as economic ties — with China.

“I don’t envy her,” a commentator for a major Taiwanese daily publication told China Cheat Sheets. “I want to see how she can stand the pressure from China on the cross-strait issues.”