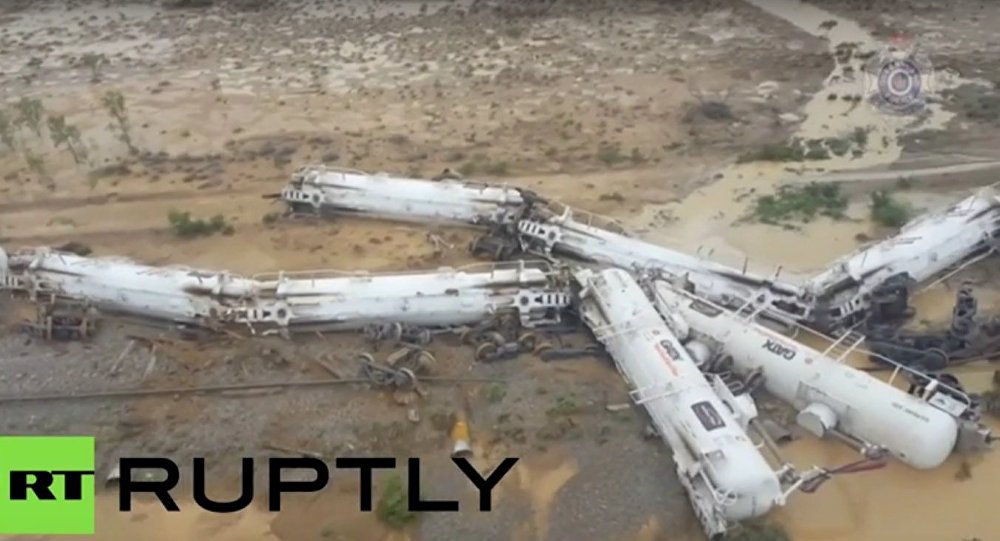 Train derails in Australia with acid on board https://t.co/r6AJITHT8c pic.twitter.com/0eDUAwfvjJ

The train, carrying some 200,000 liters of sulfuric acid, derailed Sunday morning, 20 kilometers east of the town of Julia Creek. The locomotive and all 26 cars of the train’s rolling stock came off the rails, leading to acid and diesel fuel leaks, according to local police.

Three men aboard the train were reported injured as a result of an accident.

Amid the unpredictable weather conditions, the impact on the environment by the acid spill cannot be properly assessed, Queensland Police reported. As of Monday, a two-kilometer exclusion zone around the wreckage area remains in place.

"You have to take into account it's remote, it's impacted heavily by weather, access is quite difficult, and these are the challenges the responders are facing at the moment," BBC reported quoting Trevor Kidd, a police inspector, as saying.

© Flickr / Sascha Grant
Huge Fire Causes Factory on Australia's East Coast to Collapse
Kidd hoped that the remoteness of the crash site would limit the scale of damage.

"It is some significant distance from major waterways and any major infrastructure, so we do have something going our way as far as that goes," he added.

So far, the cause of the derailment and the extent of damage to the track, remain unknown due to weather conditions, Queensland Rail, the state-run railway operator reported.

According to media reports, the track will be closed for the next few days.