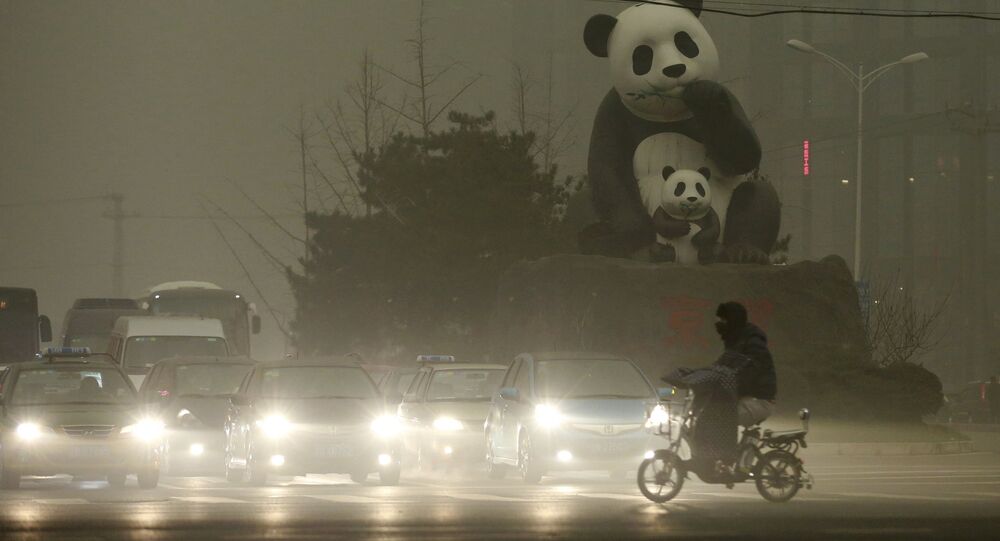 A resident of the Chinese city of Shenzhen has reportedly managed to make a brick from the smog which normally chokes the country's capital.

© AFP 2021 / FRED DUFOUR
Stay Indoors: Beijing Air Pollution Reaches Critical Level
In a bid to raise social awareness regarding climate change-related problems, a resident of the Chinese city of Shenzhen spent 100 days in the capital Beijing collecting smog and finally compressing it into a kind of a "brick", media reports said.

The man, who prefers to call himself "nut brother", said that he first floated the idea in 2013, when local media reported an extremely high level of air pollution in Beijing.

Over the past 100 days the man has collected air pollutants with an industrial vacuum cleaner in front of the city's landmarks, such as the National Grand Theatre, CCTV headquarters, Tiananmen Square, and the National Stadium Bird's Nest.

He used a vacuum cleaner that could operate for four days with every charge, sucking in the amount of air that 62 people breathe every day.

On Monday, he compressed the dust at a factory in the city of Tangshan in Hebei province, and fired the processed dust into a brick. The man said that he plans to use the brick as building material in Beijing.

According to him, "we will turn into dust with the exhaustion of resources."

© AFP 2021 / ROBERTO SCHMIDT
New Delhi Air Pollution to Reach Record Level
Meanwhile, Beijing authorities have announced that that the city's air pollution alert had been scaled up from yellow to orange, which is believed to be the highest smog alert of the year.

Air pollution kills about 4,000 people in China every day, according to the research center Berkeley Earth, which cited emissions of harmful gases from automobiles and industrial companies as the main causes of China's smog.