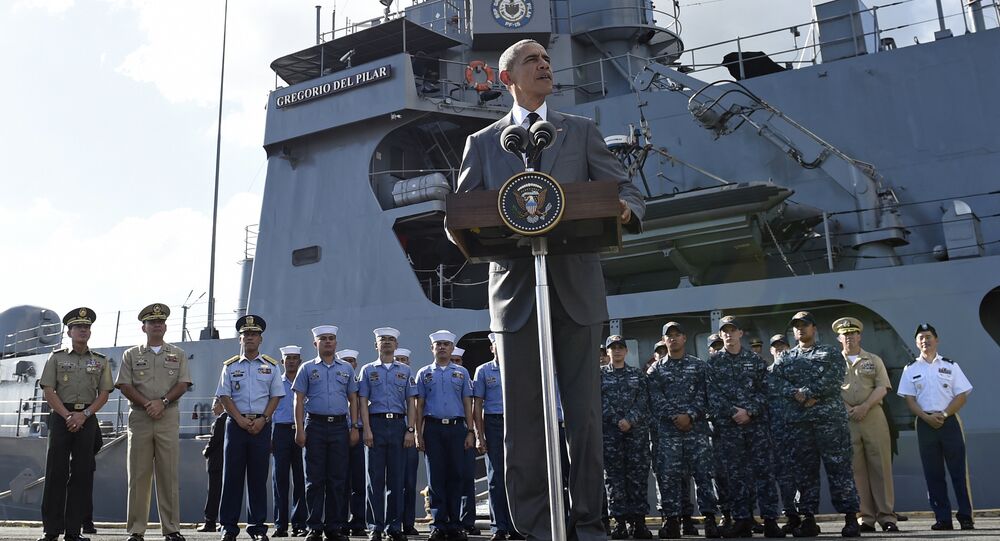 The US military seems a little uncertain of its own military might against China in the South China Sea. Even as it plans to reopen its military bases in the Philippines, it requires Manila to play the ‘underdog’ in a narrative that aims to ‘isolate China from peace-loving, law-abiding nations’, thus shaping its behavior in the region.

The US is awaiting the ruling of the Philippine Supreme Court on the US-Philippines Enhanced Defense Cooperation Agreement (EDCA), which will "provide US forces with access to a number of to-be-determined bases in the Philippines — likely including Clark air base, Subic bay, and facilities on Palawan island, close to the disputed Spratlys," according to Michael Mazza, writing for The National Interest magazine.

This will allow "units operating from them to engage in a wide variety of military activities, from joint training to disaster relief to the nebulous 'other activities as may be agreed upon by the Parties.'"

However mighty the US military considers itself to be, it is still in need of "its allies and partners to partake in efforts to constrain Chinese assertiveness."

© AFP 2020 / ROBERT GONZAGA
USS Chicago (SSN 721), a Los Angeles class fast-attack submarine, is anchored at Subic Bay port on August 6, 2015, after arriving on August 4 as part of its deployment in the Western Pacific

The magazine suggests that it well can be the Philippines’ weakness, which will help to "shape China’s behavior."

"Just as important, the Philippines’ weakness relative to China and its pursuit of international arbitration to defend its interests — especially when compared to China’s refusal to engage in such arbitration when it is treaty-bound to do so —has given it the moral high ground," Mazza suggests.

"Manila is an underdog, employing peaceful means in defense of what it believes to be right."

"That narrative isolates China as something apart from the international community of peace-loving, law-abiding nations, an outcome that can, along with allied military strength, positively shape Chinese behavior."

"Unfortunately, whether Manila continues to show such backbone in the months and years ahead is an open question," the author laments.

© AFP 2020 / TED ALJIBE
US Marine V-22 Osprey aircraft (R) taxi on the tarmac after the arrival of US President Barack Obama at the international airport in Manila on November 17, 2015, to attend the Asia-Pacific Economic Cooperation (APEC) summit

In a word of advice to President Obama, who is currently in Manila for the Asia-Pacific Economic Cooperation (APEC) summit, Mazza proposes that he "call on the Philippines to do its part in building an Asia that is prosperous, peaceful, and free", cautious of the increasingly voiced "more conciliatory-though certainly not appeasing —approaches to Beijing".