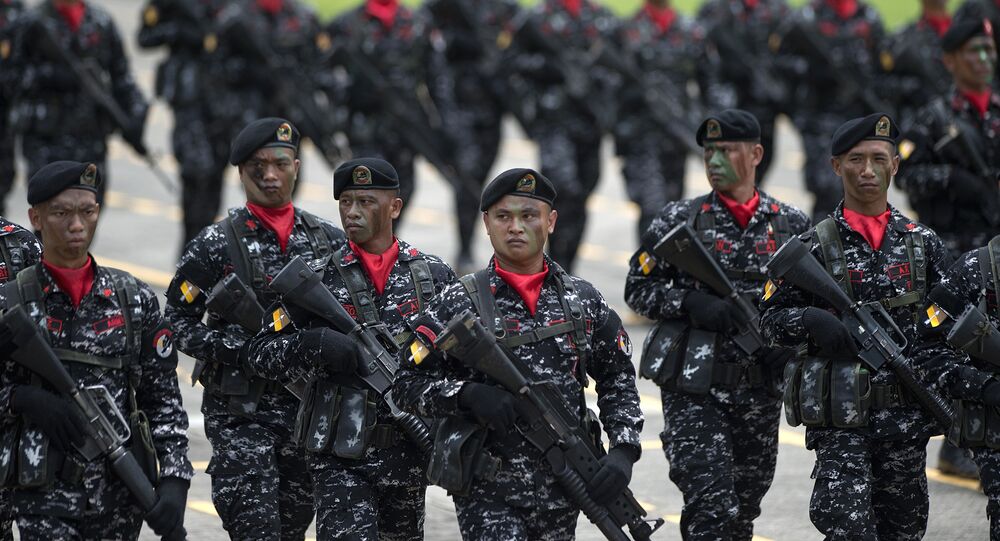 The Armed Forces of the Philippines have managed to seriously decrease corruption in the country and make military spending more efficient by sticking to the APEC good governance initiative for 2015, the chief of staff of the armed forces told Sputnik on Friday.

MANILA (Sputnik), Anastasia Levchenko – According to Iriberri, the changes that the local military underwent allow it to align its budget to the attainment of specific goals.

"A dozen of the Philippine public sector agencies have been named 'Islands of Good Governance' for their successes in fight against corruption and implementing reforms to raise transparency throughout the year," General Hernando Iriberri said, adding that the country’s Armed Forces were among these "islands."

© AP Photo / Shizuo Kambayashi
US, Philippines Set to Discuss Defense Cooperation Deal During APEC Summit
"Before we were just focused on supporting our operations, without really looking at how the administrative side would contribute to achieve our goals. But now our administrative side has been indeed optimized – now we have a clear system of how to measure our performance as far as the budget is concerned," the chief of staff stressed.

APEC leaders recognized the threat of corruption to economic growth back in 2004, when they met in Santiago, Chile. Since then, they have been working together to promote transparency and open governance as a crucial element of long-term economic competitiveness.

Manila currently hosts the APEC Economic Leaders’ Week, bringing together senior officials and businessmen from 21 Asia-Pacific economies. Prior to the leaders' summit next Wednesday, APEC senior officials are reviewing the work of the group over the last year and defining priorities and action plans for the future, to be endorsed by its members’ heads-of-state and ministers at the concluding leaders' summit.