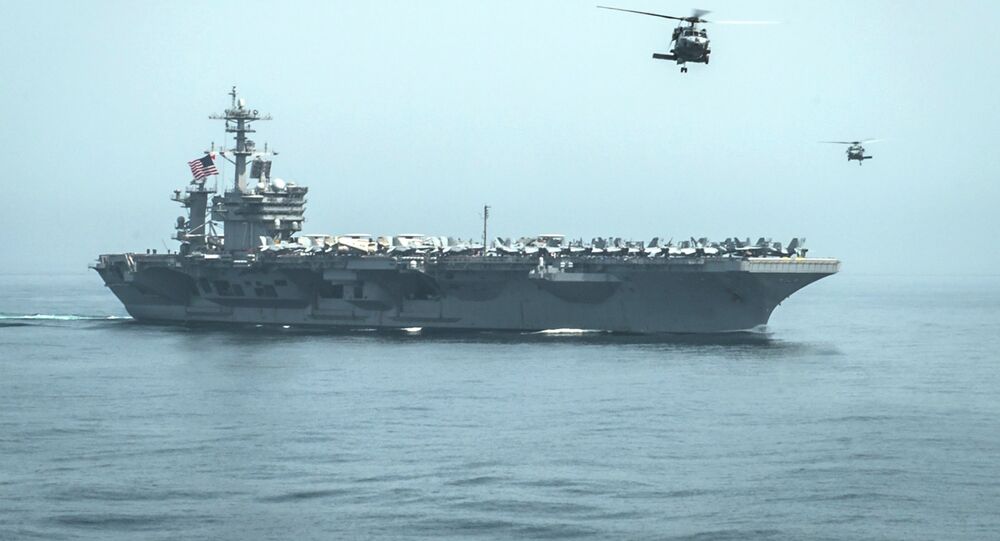 The Pentagon’s aggressive decision to send patrol ships through contested waters in the South China Sea outraged Chinese officials. Now US Defense Secretary Ash Carter has upped the ante by personally boarding one of the vessels, alongside his Malaysian counterpart.

It was Defense Secretary Carter who first publicly proposed using naval patrols in the South China Sea to challenge Chinese territorial claims around the Spratly archipelago.

"The United States will fly, sail, and operate wherever international law allows," he famously said during a news conference in September.

That plan went into action last month, and while Beijing immediately called for all sides to remain calm, those patrols have continued.

On Thursday, Carter boarded the USS Theodore Roosevelt as it made its way through contested waters in the South China Sea. At his side was Hishammuddin Hussein, his Malaysian counterpart and equally vocal critic of Beijing.

While Carter downplayed the significance of his presence, it’s hard to ignore the message being sent.

"If it’s being noted today in a special way, it’s because of the tension in this part of the world, mostly arising from disputes over land features in the South China Sea," he said, according to the Associated Press.

"And most of the activity over the last year being perpetrated by China. There’s a lot of concern about Chinese behavior out here."

Carter is referring to Beijing’s construction of artificial islands in the Spratlys. The US has accused China of using the islands to legitimize territorial claims in the region, and potentially to establish a military defense zone.

China has repeatedly denied these claims, insisting that the islands will be used primarily for humanitarian purposes, and reiterating that it has every right to build within its own territory.

Last week, the USS Lassen sailed within the 12-mile territorial limit of the artificial island atop Subi Reef, an action which Beijing described as a “blatant provocation.”

"[The US] insists on its ships crossing waters close to the islands belonging to China to demonstrate its power under the pretext of freedom of navigation. It is a blatant provocation," Chinese Foreign Ministry spokeswoman Hua Chunying said.

Carter’s decision to appear alongside Hussein is particularly eyebrow-raising, given Malaysia’s own land reclamation projects in the region.

With nearly $5 trillion in trade passing through the South China Sea annually, the waterway is a highly contested region. While China lays claim to most of the sea, there are overlapping claims by Vietnam, Malaysia, Taiwan, Brunei, and the Philippines. The United States has no territorial claims to the region.