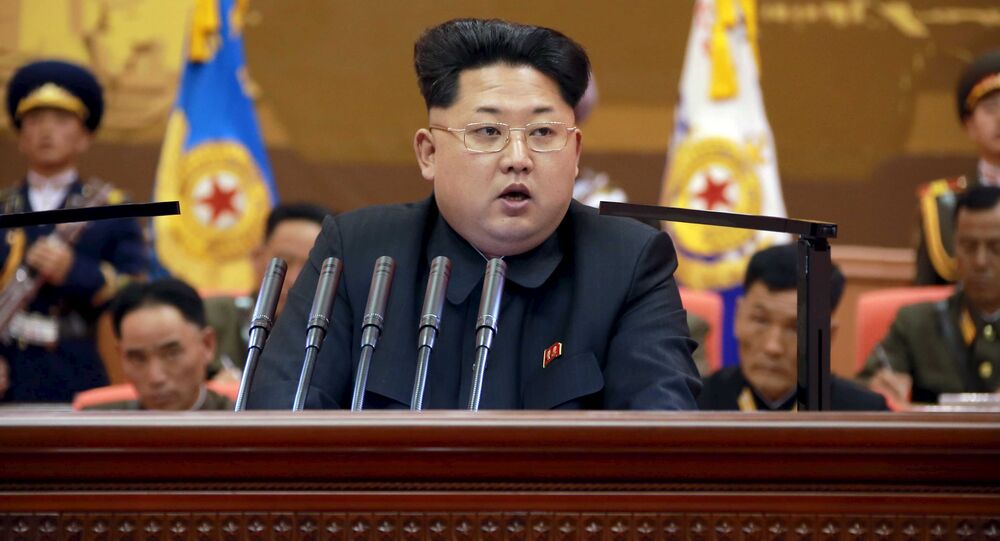 © AFP 2021 / Rodong Sinmun
Japan, EU Hope to Haul North Korean Gov't to the Hague Over Rights Abuses
Talks in Seoul between the allies were marked with a statement that a set of four major operational guidelines will be enough to easily "detect, defense, disrupt and destroy" the North's missiles, if necessary.

Soon after that news broke, Kim Jong Un demanded that his military and scientists build better rockets — more modern and with better "precision", according to Yonhap News Agency.

North Korea's state media reported Tuesday that Kim addressed his military during a firing drill in a western sector of the inter-Korean border.

"He underlined the need for the field of national defense science to more dynamically develop various types of new anti-aircraft rockets suited to the demand of a modern war so as to firmly defend the blue sky of the homeland from any air strike of enemies," Pyongyang's Korean Central News Agency (KCNA) reported.

Exactly where and when the training was conducted wasn't clear, however. Some experts believe that the drills were held before the talks between Han and Carter. "But North Korea released a relevant report just after that," said Yang Moo-jin, a professor at the University of North Korean Studies, as cited by the Korea Times. "It seems to be strategically intended to counter the South Korea-US coordination."

© AP Photo / TPX IMAGES
North Korea to Convene First Ruling Party Congress in Decades
The 32-year-old supreme leader of North Korea expressed dissatisfaction with his military's efforts and demanded stepping up the game in ensuring modernization and precision of the rockets to further strengthen the country's defense capabilities.

American conservative think tank the Heritage Foundation reported in its 2016 Index of US Military Strength — an annual report which examines the strength of the US military as well as potential rising threats to the US and its allies from across the world — that North Korea now has a range of ballistic missiles allegedly capable of hitting the US mainland and its interests across the Pacific.

The most dangerous of North Korea's arsenal for the US is likely the KN-08 ballistic missile. North Korea experts John Schilling and Henry Kan estimated in an article for Johns Hopkins University's 38 North that the KN-08 has a maximum range of 5,600 miles, making the missile capable of hitting the West Coast of the continental US.

"It's the relocatable target set that really impedes our ability to find, fix, and finish the threat," Adm. Bill Gortney, commander of NORAD (North American Aerospace Defense Command), said in April. "And as the targets move around and if we don't have the persistent stare and persistent [intelligence, surveillance, and reconnaissance] that we do not have over North Korea at this time, that relocatable nature makes it very difficult for us to counter it."

Red Cross to Record 10,000 Videos of South Koreans for Relatives in North