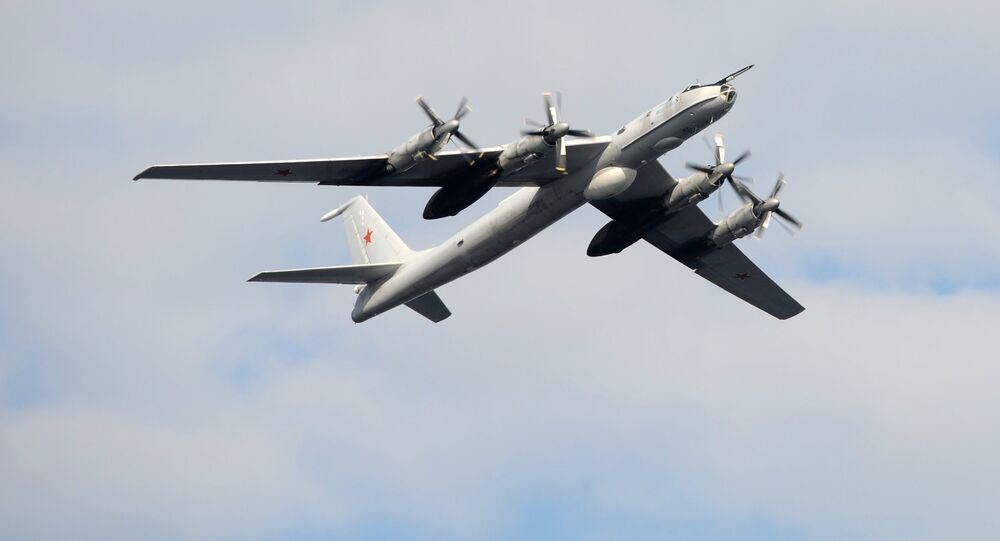 US Navy officials commented, alluding to the situation in the South China Sea, in which US ships passed through international waters, just as the Russian Tu-142 flew through international airspace at the time. US and Soviet surveillance aircraft often trailed each other's aircraft carriers during the Cold War, in a bid to show the ineffectiveness of the other side's ships.

"We are advocates of any country being able to operate within international norms," the US Navy's Seventh Fleet spokeswoman Lt. Lauren Cole said.

© AP Photo / Xinhua, Li Tang
As Tensions Rise, US Sailors Visit Chinese Aircraft Carrier
A US Navy official told Reuters on condition of anonymity that the Russian plane came within one nautical mile (1852 meters) of the US carrier, and that both US and Russian pilots behaved professionally during the incident.

US Navy officials also complained about the safety of the Russian aircraft's flight, claiming that it descended to an altitude of 500 feet (152 meters) and did not make radio contact with the US carrier. The Tu-142 long distance naval surveillance aircraft is a derivative of the Tu-95 bomber, and entered service in 1972.

"We would characterize this as still at a safe distance. This kind of interaction is not unprecedented," Navy spokesman Cmdr. William Marks told Fox News.

A US Department spokesman confirmed the incident in a RIA Novosti interview.

“I can confirm that two Russian TU-142 Bear aircraft approached the SS Ronald Reagan [aircraft carrier] on the morning of October 27 while Reagan was operating in the Sea of Japan,” Bill Urban said.

In response, the United States deployed four armed F-18 fighter jets from the USS Reagan to escort the Russian aircraft out of the vicinity of the aircraft carrier, the spokesman added.