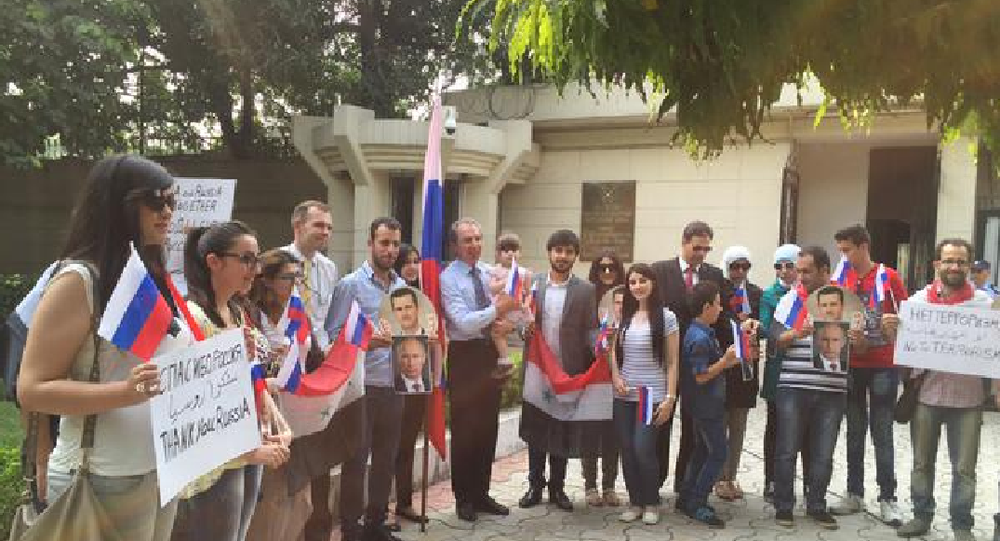 Syrian students and diplomats held a rally in front of the Russian Embassy in the Indian capital New Delhi on Sunday to express their gratitude to Russian people for Moscow's support in the Syrian war against terrorism.

NEW DELHI (Sputnik) — Russia launched airstrikes on positions of the Islamic State at the request of Syrian President Bashar Assad on September 30.

"We have come here today to demonstrate in front of Russian embassy to express our gratitude to the Russian people, the Russian government and the leader of Russia for their position towards the Syrian government and helping us against the terrorist groups in Syria," the student leader, Zulfikar Abbas, told Sputnik.

Syrian student Lama Mando added that the rally was "a kind of a simple gesture to show our gratitude to the Russian government for helping Syria in its war against terrorism."

"The situation has improved quite much after the aid of the Russian army. Yesterday I was so happy because there was a lot of improvement in suburbs of Homs, my city," Mando pointed out.

Muhammad Alghazzawi, Syrian diplomat serving as a counselor in his country's Embassy in New Delhi, stressed that Russia is fighting terrorists "on behalf of the world."

"The crisis in Syria cannot be solved before the terrorism is finished. Almost for five years we have been fighting the terrorist groups. Unfortunately, the United States and major Arab countries have been supporting terrorists against the Syrian government," Alghazzawi told Sputnik.

The Russian diplomats appreciated this initiative of Syrian students to demonstrate solidarity with the Russian decision to support the Syrian government fighting against ISIL in Syria.

© AP Photo / Muzaffar Salman, File
Syrians View Russians as Heroes – British Journalist
"In this way we see the strength of our solidarity in common fight against the common enemy. If we do not defeat this danger today or tomorrow, this threat may grow and it may reach the borders of our country, Central Asia, Afghanistan maybe also India," Sergei Karmalito, the senior counselor in the Russian Embassy, told Sputnik.

Russia’s airstrikes already destroyed 40 percent of the Islamic State infrastructure in Syria, according to Syrian Ambassador to Russia Riad Haddad.

Obama Administration Fractured Over US Approach to Russia in Syria