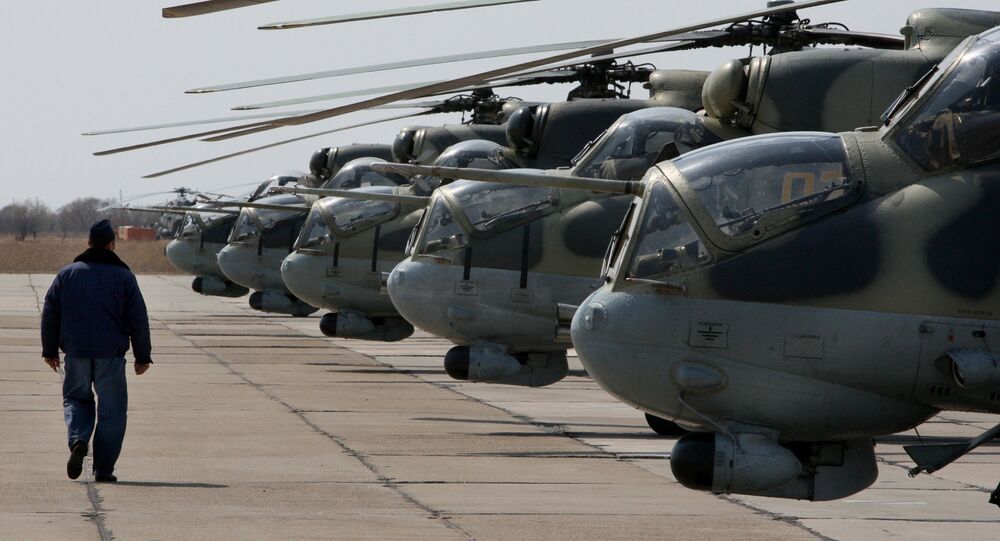 Russia's military said it will beef up its force in Tajikistan, which neighbors Afghanistan's Kunduz province, the site of a recent uptick in Taliban violence.

The unit now includes Mi-24P attack and Mi-8MTV transport and combat helicopters. The helicopters will be stationed at the 201st military base,  in the former Soviet republic of Tajikistan, which borders Afghanistan. Violence on the Afghan side of the border escalated in recent weeks after Taliban militants seized the city of Kunduz, prompting a response from US and Afghan forces.

"The military capabilities of the 201st military base <…> will be enhanced by helicopter aviation. The created aerial grouping will be based in the Gissar district of Tajikistan, at the Aini air base 30 kilometers from Dushanbe," Roschupkin told journalists.

© Sputnik / Alexandr Yuriyev
Turkmenistan Strengthens Border, Bracing for Spillover of Violence From Neighboring Afghanistan
The 201st military base is the largest Russian Ground Forces base outside of Russia. The base is currently located on the outskirts of Tajikistan's capital, Dushanbe. The base also takes part in providing Tajikistan's military with compatible weaponry and military-technical cooperation.

Tajikistan also borders Afghanistan's Kunduz province, where violence has escalated. The military base is approximately 200 kilometers away from the border, while the airfield where the helicopters are to be stationed is slightly farther.

Russia has previously increased security in the country through regular drills together with Tajikistan's military. The latest large scale exercise took place in May 2015 with the participation of the Collective Security Treaty Organization's (CSTO) rapid reaction forces.