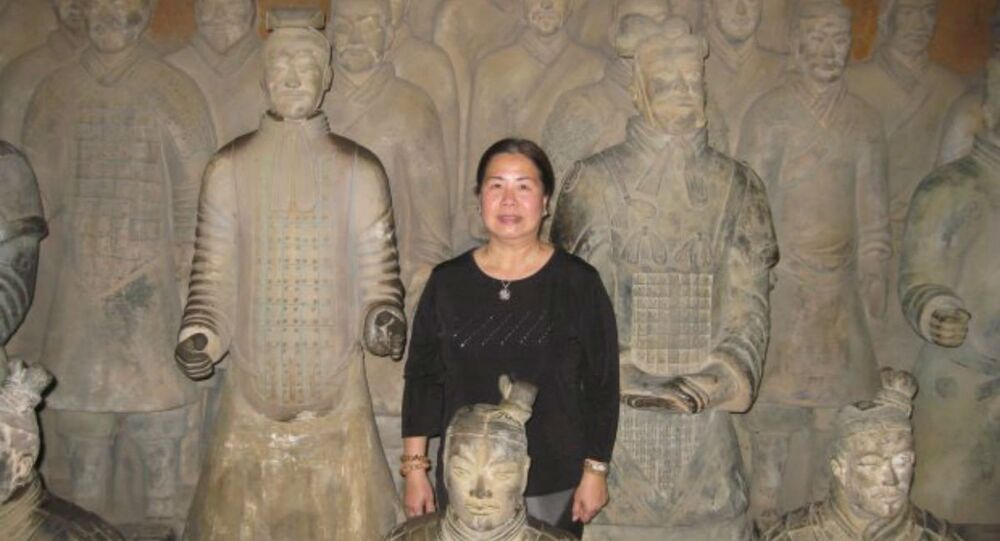 An American woman has been formally arrested in China on suspicions of spying, just ahead of Chinese President Xi Jinping’s first state visit to the United States.

© AFP 2019 / Greg BAKER
Chinese Leader to Discuss Issues of ’Common Concern’ With US President
Sandy Phan-Gillis is from Houston, Texas, but her family is originally Chinese. According to a website set up for her by her family, Phan-Gillis is a "businesswoman, and an entrepreneur." The president of the Houston-Shenzhen Sister Cities Association and member of the Houston mayor’s International Trade and Development Council, Phan-Gillis helps broker business ventures and investments between China and the United States, and as such, travels to China frequently.

On her last visit in March, Phan-Gillis traveled with a trade delegation that included Houston’s pro-tem mayor Ed Gonzalez and his chief of staff.  The delegation was traveling from Zhuhai to Macau when she was detained at a checkpoint.

The Houston woman was placed on residential surveillance – similar to house arrest – in the capital city of the southern Guangxi region, Nanning, until the weekend of September 19-20, when she was formally arrested.

China’s Foreign Ministry has confirmed the arrest, saying she was "suspected of engaging in activities that harmed China’s national security." No additional details about the allegations were provided, but Foreign Ministry spokesman Hong Lei noted that Phan-Gillis has been "assured of all her rights…and is in a good state of health and is cooperating with the investigation."

"We hope that the outside world will respect China’s handling of this case according to the law," Hong said at the news conference in Beijing.

The US State Department has also said it was aware of Phan-Gillis’ detention, and has been providing "all possible consular assistance" since March. Spokesperson for the Department’s Bureau of East Asia and Pacific Affairs, Gabrielle Price, said she had been visited six times by consular officials.

White House spokesperson Josh Earnest told reporters on Tuesday that Phan-Gillis’ arrest may come up in discussions between US President Barack Obama and Xi, during the latter’s upcoming visit to DC.

"This is something that the United States State Department has been working on for quite some time," he said. "At this point, I certainly couldn’t rule out that it would come up in the conversation between the two leaders."

Her husband, Jeff Gillis, insists that his wife is innocent, and said he has chosen to go public with her detention on the eve of Xi’s visit with the hope of putting pressure on Chinese and US officials.

"My intent here was not to embarrass China or President Xi Jinping. It was really to encourage them to release Sandy in the lead-up to the state visit," he said, according to Reuters.

"My wife is not a spy, she is not a thief," he told NBC affiliate KPRC. "I am concerned, though, that if we can’t get her released this week that it could very easily be years. And my wife is not guilty of anything – she needs to be let go."

Gillis, who has not spoken with his wife since her arrest in March, added that no formal charges have been brought against her and that she is in poor health. He told KPRC that his wife suffers from a number of chronic ailments, including high blood pressure, and that she had run out of medication at some point during her detention.

He also accused the US State Department of not doing enough to ensure his wife’s release.

"I got the impression that in DC, they just didn’t care about my wife," he told the New York Times. "I do not think that you can take a policy that you apply to someone who’s been arrested for shoplifting in France and apply it to somebody who’s been detained by Chinese spies."

Chinese President Denies Beijing Behind Cyberattacks on US Companies