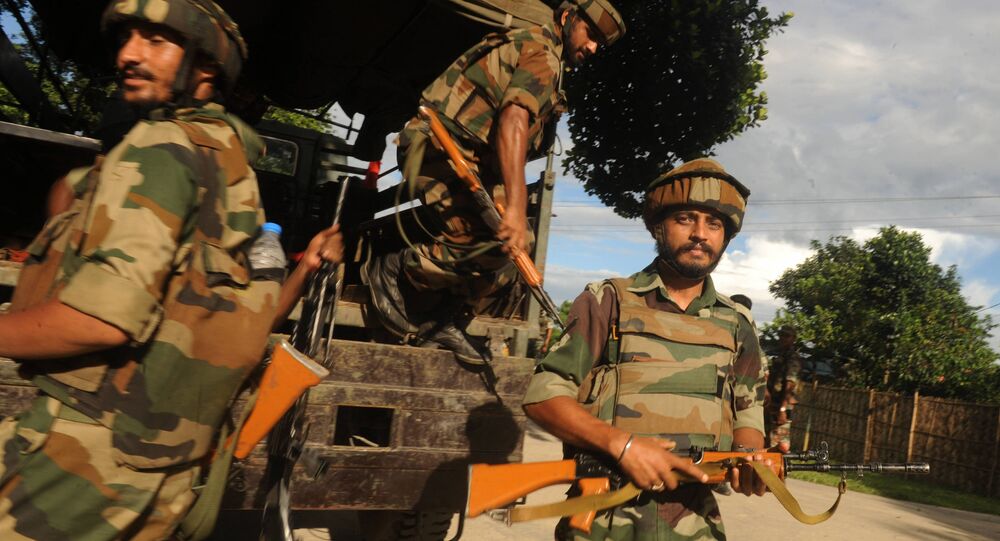 Large-Scale Military Operation Against Bodo Militants Under Way in India

Indian military forces have reportedly launched their biggest operation yet against militants of the National Democratic Front of Bodoland, part of which was conducted in areas close to the international border with Bhutan.

India's military forces have staged their biggest operation yet against a militant group known as the National Democratic Front of Bodoland (NDFB), sometimes operating near the international border with Bhutan, Indian media reported.

This latest operation against a NDFB militant outfit was launched on Saturday in areas of the Bodoland Territorial Area Districts in Assam.

Assam Director General of Police Khagen Sarma admitted that even though the security forces were able to make some progress during earlier military operations against the militants, final success has yet to be achieved.

© AFP 2021 / STRDEL
Activists of the Assam Tea Tribes Student Association (ATTSA) block the NH-52 road with burning tyres during a protest against the attacks on villagers by militants from the outlawed National Democratic Front of Bodoland (NDFB) in four locations, at Baghmari in the Sonitpur district of northeastern Assam state on December 24, 2014

He added that NDFB commander B. Bidai, who was involved in last December's Adivasi massacre, has gone into hiding and spotting him will be a tricky task, "particularly due to the forested areas, which work in his favor."

© CC BY 2.0 / meg and rahul / Indian Ambulance
Seven Killed in Protests in India's Gujarat State
Earlier, an army spokesman said that during previous operations, " 18 terrorists were neutralized, 539 terrorists and workers related to them were apprehended and 175 assorted weapons, 180 hand grenades and seven improvised explosive devices seized."

The National Democratic Front of Bodoland was formed in 1986. The group seeks the establishment of an independent Bodoland state in Assam.

NDFB militants have been terrorizing non-Bodo people in remote villages of the region for decades. Two years ago growing violence in the region triggered a massive outflow of 300,000 Assam residents to refugee camps.