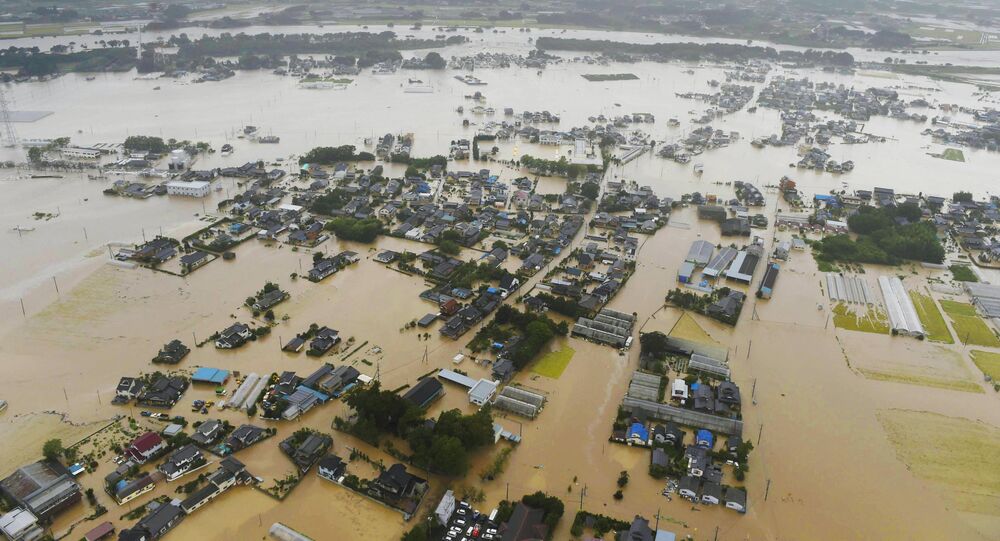 Emergency warnings for heavy rainfall in Tochigi and Ibaraki prefectures were issued by the Japan Meteorological Agency.

TOKYO (Sputnik) – The Japan Meteorological Agency (JMA) issued emergency warnings for heavy rainfall in Tochigi and Ibaraki prefectures on Thursday as the Etau storm continued to threaten the country with landslides and flooding.

JMA also issued the highest level flood warning for the Kinugawa River flowing through the prefectures north of Tokyo, on Thursday morning.

Etau was declared post-tropical on Wednesday, however the storm continued to bring heavy rain in Japan on Thursday.

© AFP 2020 / JIJI
Typhoon Etau in Japan Injures 10, Leaves 320,000 Evacuated
At least 100,000 were ordered to evacuate in the Tochigi and Ibaraki prefectures, amid heavy flooding and landslides caused by the storm, according to the Weather Channel.

Local TV reports said that one person was missing in Tochigi Prefecture early on Thursday. The Japan Self-Defense Forces have sent contingents to the prefecture to deal with the aftermath of heavy rains.

In the Greater Tokyo area, hundreds of thousands of people have been advised to evacuate voluntary, the Weather Channel said.

Storm advisories are in effect in the Chiba, Kanagawa, Saitama, Miyagi, Nigata, Yamagata and Fukushima prefectures.

An emergencies headquarters has been set up at the crisis centre of the Office of Japanese Prime Minister Shinzo Abe amid the storm.