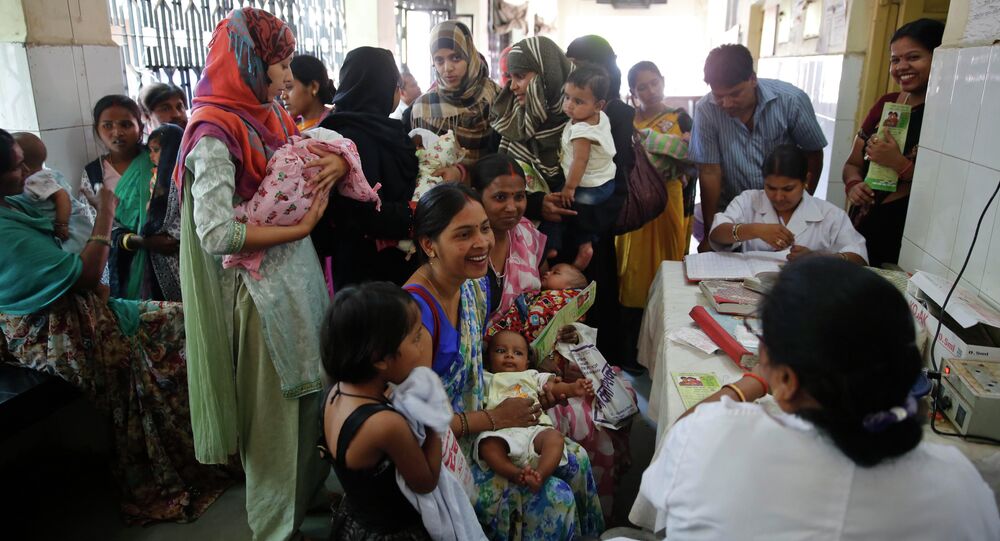 After eradicating polio over a year ago, India has just achieved a new milestone in public health by virtually eliminating tetanus, a disease that kills newborn babies and their mothers.

© Sputnik / Mikhail Mordasov
WHO Committee Reviews Western Pacific Region’s Progress in Responding to Health Challenges
After a 15 year-long United Nations campaign aimed at eliminating the deadly disease, India has reduced the cases of tetanus to less than one per 1,000 live births, which the World Health Organization (WHO) classifies as its "elimination as a public health problem."

The announcement was made by Prime Minister Narendra Modi, who noted that the disease was eliminated much earlier than its target date set in December.

"I am also happy to share with you today another major milestone achieved by India," he said during an address at the ‘Global Call to Action’ Summit, attended by representatives of 24 nations. "India has eliminated maternal and neonatal tetanus."

Tetanus often results from a skin wound that has come to contact with a disease called clostridium tetani, found in dirt, soil, and animal dung. The disease commonly infects newborns when their umbilical cord is cut with an unclear blade, and mothers when they give birth on dirt surfaces or are being aided by midwives with unwashed hands.

According to WHO estimates 15 years ago, almost 800,000 newborns died from the disease each year. In 1999, the United Nations launched an immunization drive to eliminate the disease as part of the Maternal and Neonatal Tetanus Initiative.  More recent estimates indicate that fewer than 50,000 newborns are killed by tetanus.

India was one of 58 countries under the United Nations immunization framework. According to UNICEF, the country’s success was especially unique because it implemented additional policies to combating tetanus other than immunization.

In addition to the millions of mothers who received tetanus shots, a program was created to encourage mothers to give birth in hygienic environments. Mothers were paid $21 to give birth in a clinic or hospital. Those who insisted on giving birth in their homes, as part of a local custom, were provided with kits that included antibacterial soap and a sterile scalpel for cutting the umbilical cord.

The WHO initially set 1995 as the target year to eliminate tetanus, but the initiative’s progress has been relatively slow, due to the nature and origin of the disease. According to the organization’s Southeast Asia director, Dr. Poonam Khetrapal Singh, tetanus can never be fully eradicated because the bacterial spores that cause it exist in the soil everywhere.

Tetanus continues to represent a serious public health threat in 22 countries, including Afghanistan, Pakistan, and Nigeria.